10 acts to check out at Playa Del Carmen’s DEPARTURE

Teaming up for a unique experience, Pollen Presents, The Brooklyn Mirage, and The Cityfox Experience present DEPARTURE, a five-day experience in Playa del Carmen, Mexico, starting on January 6th, 2022. 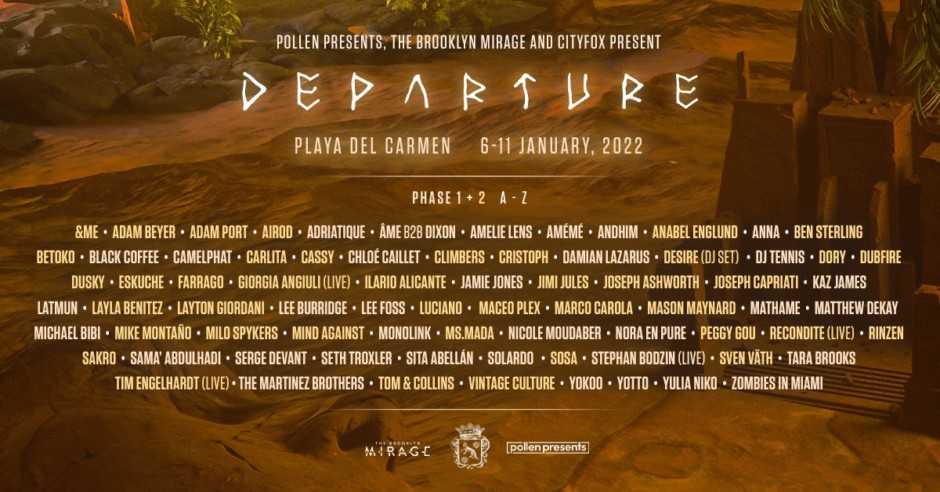 With such a showstopper of a line-up, we’ve decided to highlight 10 of these promising acts.

With a career that spans over some 40 years, the German 3-time DJ Awards winner and Cocoon brand owner is one of techno’s true forces of nature. One of vinyl’s finest exponents, Väth has a unique affinity with each piece, becoming instruments in his world-renowned sets.

Also known as Maetrik and Mariel Ito, Maceo Plex is a Cuban-American DJ, producer, and Ellum Audio mastermind. Also a DJ Awards winner, Maceo Plex is best recognized for his dark and relentless metier for widescreen, cinematic techno. He has remained busy this year, with a new single on Ministry of Sound, guest mixes for BBC Radio 1, and a Beatport Number 1 for his remix of Faithless’s ‘Insomnia’.

One half of Grammy Award-winning duo Deep Dish, the SCI+TEC founder is one of the scene’s most prominent figures. With a knack for soulful techno, Dubfire enchants and dazzles audiences with class and panache throughout with sets that showcase the more forward-thinking side of the genre.

An eternal alchemist, Damian Lazarus is one of the underground’s most enigmatic faces. Crosstown Rebels, Day Zero, Get Lost, his own DJ and production career, the discovery of a wealth of influential talents…all of these achievements and more make Damian Lazarus not only one of the most respected exponents of the contemporary house and techno scene, but also one of its key tastemakers and pathfinders.

Ignited by an internal combustion engine fueled by raw emotion, Nicole Moudaber is at the forefront of her own movement. The sought-after DJ and producer presides over an empire that includes MOOD; her highly influential record label and global party brand, as well as a hugely popular radio show, a back catalog of incendiary techno releases, and a range of philanthropic endeavors.

An absolute master of the craft, Recondite treads his own path, uncaring for fashion or hype. Purveyor of a slow-burning brand of techno, Recondite finds value in the negative space, seeing beyond what most do. Spacious and gracious, his music goes straight for the heart. An unforgiving dagger.

Stand-out London duo Dusky are one of tech-house biggest names thanks to their flavorful and energetic pieces. Having been hailed as a breakthrough act by names like Pete Tong already back in 2013, the pair have been on a steady rise ever since with hits such as ‘Skin Deep’, ‘Careless’, ‘Ingrid Is A Hybrid’, and the launch of their own 17 Steps label.

South African-Swiss sensation Nora En Pure is rippling through the sonic sphere with her beautiful blend of electronic beats. Gracing the decks of some of the most revered dance music spots over the years, Nora has played sets at the likes of Ultra Music Festival, Coachella, Tomorrowland, Ushuaïa Ibiza, Mysteryland USA and held residencies at the world’s largest clubs like Privilege Ibiza and Marquee Dayclub Las Vegas.

Whether it’s through production or playing, Tara’s continued passion for sharing her music knows no bounds. She’s a resident for Desert Hearts and Subtract Music, and has released EPs on labels such as John Digweed’s Bedrock Records, Kattermuke, and many more.

Composer and multi-instrumentalist Giorgia Angiuli has positioned herself as one of the most creative acts on the circuit. She moves between pop, techno, and house, implementing her voice to create dreamy dimensions that are intensified by the use of unique toy instruments. During her sets, she combines keyboards, drum pad, and theremin with the sounds of toy flute, sax, trumpets, and many other toys for some uniquely spellbinding performances.

DEPARTURE will be held at Playa Del Carmen from January 6th to 11th, 2022. Find more info and tickets here.