10 sets to kick Miami’s ‘Art With Me’ into gear

Art With Me is an immersive festival that combines art, music, workshops, wellness, and cultural experiences into a multi-day journey to inspire change through ‘impactful creative encounters’. With the full festival experience coming to Miami, the brand has already revealed its first line-up which includes performances by Anja Schneider, Sublime With Rome, Lee Burridge Presenting All Day I Dream, Cultura Profética, Tycho:ISO50, Oceanvs Orientalis, Behrouz, Rodriguez Jr. (live), YokoO, and many more.

Ahead of its Miami 2021 edition, which is bound to take place on November 26th to 28th at the Historic Virginia Key Beach Park located in the city of Miami, we have selected 10 (+2 bonus) recent sets by some of their performers to kick things into gear.

The flying duo DJ/producers Alex H. & Adrian C, better known as Birds of Mind, will be making their presentation on Friday 26th with deep, intricate melodies that showcase a unique sensibility.

Founder of Cocolino Records, Pour Vous Recordings, and occasional provider of dancefloor cakes. Keep an eye out for those cakes on Friday the 26th.

French-born, Australian at heart, Lisbon-based, and a full-time globe trotter, over the last few years YokoO has floated, dreamed, and swooned his way across the world to some of the loftiest echelons. One of Friday’s highlights.

Blending multiple stylistic components, including downtempo guitar, analogue synthesis, and ambient elements, Scott Hansen is the purveyor of a unique sound that stands on a class of its own with albums like the pristine ‘Dive’, ‘Awake’, or ‘Simulcast’. With a rotating lineup on stage and mesmerizing visuals, Tycho creates one of the most hypnotizing live shows around, submerging listeners in a wall of warm sound.

Brought up under the tutelage of the great Laurent Garnier, Rodriguez Jr. has made waves in his own right with his prolific and award-winning music productions. See him take the stage at Art With Me on Saturday 27th.

Founded by Safak Oz Kutle, Oceanvs Orientalis is a formation that aims to challenge the aesthetic perception in electronic music. It may feature itself mostly as a one-man action and sometimes as a band tour de force. Find him on Saturday 27th.

The Stil vor Talent founder has been an instrumental figure in the electronic music scene, championing other artists, such as Township Rebellion, Reinier Zonneveld, KlangKuenstler, or HVOB. Find out why the German is one of the most respected figures in electronic music on Saturday 27th.

A DJ, producer, radio broadcaster, label boss, tireless creative force, and mentor; renowned as one of the hardest working figures within the music industry. Currently, Anja is three years into her Sous Music project, the main home for her own productions including the critically acclaimed ‘SoMe’ album. Schneider will be taking the stage on Sunday 28th.

Instrumental to the rise of electronic dance music in Hong Kong, the All Day I Dream founder is renowned for his storytelling musical style in his DJ sets as well as for his energy and enthusiasm in the DJ booth, making him one of the most recognizable faces in the scene. Catch Lee in all his dreamy splendor on Sunday 28th.

Öona, not having many friends growing up besides imaginary ones, found comfort in coding and cracking software on her PC, and went on to perform at clubs before she was even legally allowed to at age 17. Now a graduate of The International Academy of Design and Technology for Digital Media and Recording Arts, her original production spans broad dance floor territory, from techno, deep house to experimental electronica. Finding the balance between light and dark with both her solo work and as Slumber with her friend Amber Cox has kept her inspired and able to express both arrays of emotions through her sound.

A creative producer, Caines extends his roots through music, experiential design, and the built environment. A New York native, he has produced events internationally, leading teams from all over the world to create a haptic and participatory space that moves people, causing a reaction, and instigating change.

Fueled by an innate determination, drive, and passion, with attuned intuition applied to both his music and life, West African native AMÉMÉ channels his cultural roots and ancestry into everything he does. Born and raised in Benin, AMÉMÉ (Hubert Sodogandji) helms One Tribe, a global community and brand identity centered on unity and a positive outlook.

Art With Me’s Miami 2021 edition will take place from November 26th to 28th. Check out the daily programming below, and purchase your tickets here. 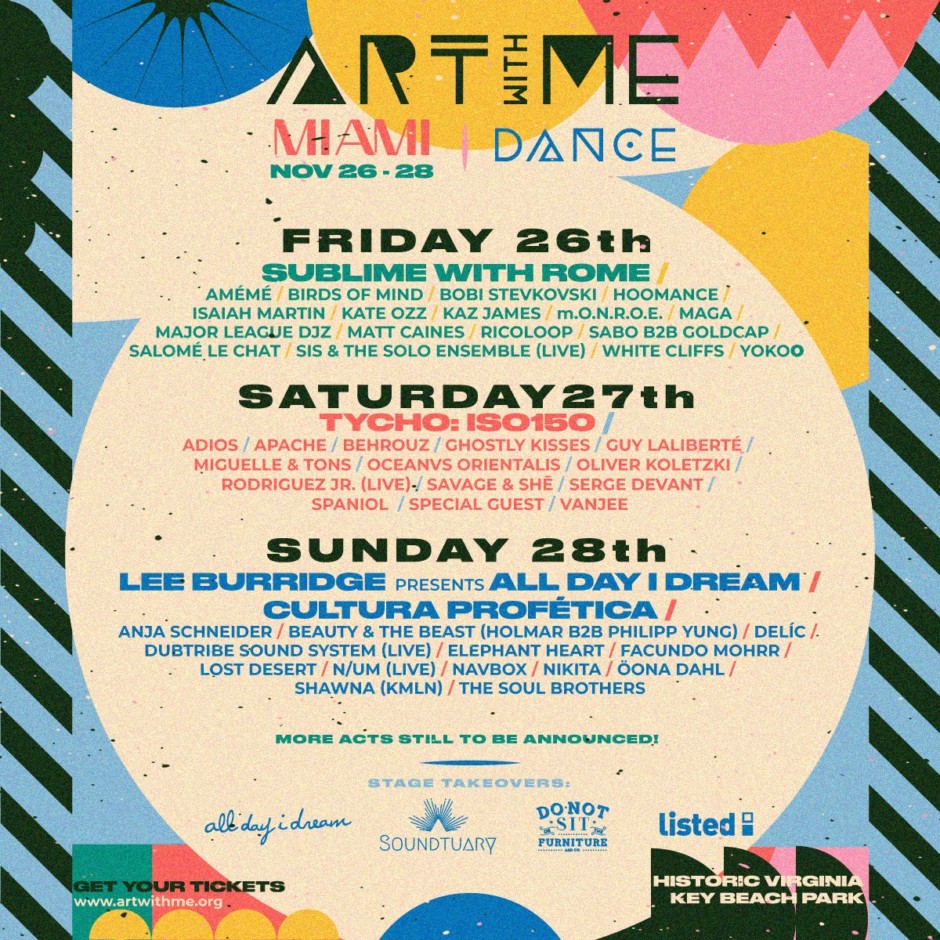