Hang the Streamers: The future of music?

As more and more DJs get into it, we dive into the whole streaming concept.

Can you recall your last party with humans in the room? For me, it was Friday, March 13th. Craig Richards was levitating the dance floor at a warehouse in East London. The party was so packed, sweat was dripping from the ceiling. Arriving home for sunrise, I stripped down leaving all my clothing -in what has now become the “quarantine foyer” of my flat. We knew that we’d just slipped in the last party before something changed but no one anticipated…this.

Since our new at-home-reality has begun, the nightlife community mobilized quickly and organically morphing into a new Livestream universe. Early adopters like John Digweed took to Facebook Live when major cities were first locking down. Peggy Gou quickly followed on Instagram Live while numerous radio stations rolled out DJ support programs like Berlin’s Radio8000 “Live-from-Home”. Most recently from the beloved city of techno is ‘United We Stream’ a collaboration of forty clubs and several other nightlife businesses in Berlin where DJ line-ups are live-streamed from the city’s venues daily from 7pm CET. Meanwhile, New York’s FSQ radio show converted their “party line” segment which promoted events, to “The Agenda” which is an exchange of resources and announcements for musicians during the global pandemic.

The tipping point for the live-stream phenomena was the D-Nice Quarantine party on March 21st of which Michelle Obama, Stevie Wonder, and Joe Biden attended, boosting the hip-hop legend’s Instagram followers from 200k to 1.3M overnight. French DJ, Bob Sinclar is another popular stream going live daily with disco bangers of which some fans utilize for their fitness routine. Live-streaming is currently our new stand-in for nightlife but also for regular life ––and it’s evolving and changing every day.

The Gardens of Babylon pulled off an online festival using a Zoom link by which nearly 1,000 festival-goers took part watching both the DJ and each other -sometimes wearing pajamas. Tonight is the second edition of their Global Isolation Party including artists like M.A.N.D.Y, Blondish, Chaim and several more who each have an hour-long slot. If you tune in this evening, Gardens owner, ShiShi Meriwani recommends that “Festival-goers log into Zoom for the connection with others whilst listening in Twitch or Vimeo for audio quality”. Welcome to our new world where DJs are the channels and platforms are the clubs. 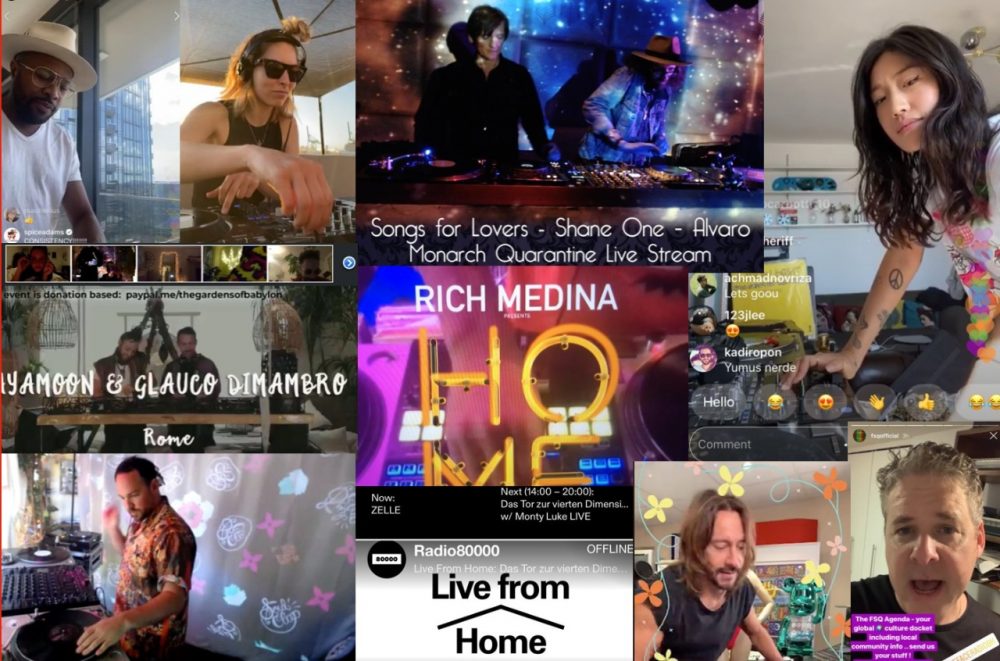 Last Saturday, DJ Rich Medina hosted his long-standing NYC party Home via his Twitch handle. It felt like the first quarantine-event of its kind using sophisticated visuals that switched among three different points of view–– the DJ, individuals dancing in “the audience” (who must have been Zoom-ing with the VJ) and classic club-imagery like old-school film clips which have come to characterize his events like Jump n’ Funk. I asked Rich (who side hustles as a professor at Cornell University) what the overarching benefit was in the new streaming zeitgeist, “Connectivity is the positive”, said the Philadelphia native, known for his blend of American garage, house and Afrobeat.

This concept of connecting with each other despite isolation was a theme that came up with all the DJs of whom I spoke. Eli Goldstein, one half of the duo Soul Clap views streaming events as necessary for the times. “It definitely feels good to still be able to share music with people but after doing a bunch last weekend the reality hit – it can’t substitute for a real party and the energy it gives me in the booth”. Check out their recent event, Soul Clap X Rollover For Italy.

DJ Holmar who plays the aforementioned Global Isolation Party was supposed to play at the first event but was challenged with technical issues. He spoke of connection too but in regard to the pandemic crisis. “We are all in this together. It’s essential to bring some light into people’s lives when it feels like the darkness is surrounding us”. Of his missed set last week he added, “It’s ok. It gave me the idea to bring in my friend DJ Saqib from The Jam Burglars who is also working on the frontline here in New York as an epidemiologist –saving lots of lives and losing some every day”.

DJ Heidi Lawden who manages DJ Harvey and is a successful DJ in her own right is not making a point of attending livestreams. “I don’t enjoy watching DJs play for an empty room but I’m happy at the sense of togetherness it’s bringing everyone”. What she prefers instead is simple audio sets perhaps alluding to the new 3-hour mix from Harvey, ‘Live From Rumors’ of which $1 or more is the asking price with proceeds going to charities like No Kid Hungry supporting children who without school during lockdown, lack two daily meals.

“I think we are at an unprecedented time in our history. Streaming has been around for a while but now with everyone stuck at home people are really listening”

Donations have the power to do good for the world reinvigorating those original rave culture values we know as ‘Peace, Love, Unity and Respect’. There is an immediate crisis close to home too. As nightclubs are shuttered and the majority of summer festivals canceled, DJs and staff need to put food on the table. Not all countries are fortunate enough to get the epic 50 billion relief package that Berlin is providing for artists. The San Francisco club Monarch jumped on this effort quickly doing one of the very first livestream fundraisers which has continued to support their staff since early March. Micah Byrnes, Creative Director and Co-owner, encourages his DJs to ask for “tips” and the club recently upped their game with another fundraiser for viral guards to support essential workers like shop clerks.

In addition to crowdfunding, are there any redeeming qualities about this new era? Micah brings it back to innovation: “I think we are at an unprecedented time in our history. Streaming has been around for a while but now with everyone stuck at home people are really listening. You don’t have to worry about keeping the dance floor going, you can play whatever you feel. People are receptive to more eclectic things and that’s exciting”.

Tonight on Monarch’s Livestream channel is ‘Songs for Lovers’ with Shane One and Alvaro Z commencing at 7pm PST. Though the duo have previously played sets for free in support of club staff and bartenders, tonight they will also include their personal Venmo link so fans can chip in. The recent news of San Francisco’s lockdown extended until May 3rd can easily ignite a feeling of apocalyptic doom. When asked about this news DJ Shane One was cautiously optimistic. “Literally everyone doesn’t know what tomorrow will bring. In some ways this crisis and new ways of doing things could be the great uniter this planet needs right now”.

So what are you streaming this weekend? Have you heard about the House of Yes Bottomless Brunch Party? Participants are strongly encouraged to avoid pants, turn on their cameras and dance. The new world of which we find ourselves feels both confined and wide-open with choice. Though isolated indoors we can also be in several “places” at once. The economy looks broken but with our crowdfunding efforts DJs and nightclubs have potential to make more than the ticket-capacity once allowed. We aren’t with each other but the love feels greater than ever as we lend a hand in trying times. Scrolling through Facebook just now, I encountered an old friend who is not in the nightlife scene at all. She was commenting on our new quarantined-reality with a quote from her father who died years ago yet the notion feels appropriate for our story. The post said, “Life’s a party, you just have to hang your own streamers”.