ADMN & Francois Dillinger: “We think people are starting to notice the consistency and willingness to take risks”

Inspired by the deep electro and techno history of Detroit, Francois Dillinger has released on the likes of Planet E, Rejekt Music, and Fanzine Records to name a few. For his part, ADMN leads a multifaceted life as a network engineer, musician, resident at TV Lounge, and label owner of Infolines, with releases on Industry Standard, Audiophile Deep, Creepy Fingers, and Anabatic. Both artists are part of the driving force behind Detroit’s creative collective and label Infolines, delivering the fourth release from the brand. Titled ‘The Bankle’, the newly dropped VA features family members Francois Dillinger, RVP, Mister Joshooa, Jeremy Kypta, Tree, and ADMN.

EG caught up with ADMN and Francois Dillinger to learn more about the release of ‘The Bankle’, how the brand operates, their work-life, origins, the city of Detroit, and much more.

EG: Hello Alexander! Francois! It’s great to have you here with us today. How have you been? Where are you right now?

ADMN: Whaddup doe! Thank you for having us! We have been pretty great, just off the heels of our new record release, and are feeling pretty good, all things considered. Currently, I am on the edge of Detroit.

Francois Dillinger: Also, feeling pretty good about our recent record release event where I had the pleasure of tagging with Remote Viewing Party for the first time. I’m based about an hour west of Detroit.

EG: Congratulations on the latest Infolines release, ‘The Bankle’! What has the reception been like so far?

ADMN & Francois Dillinger: People seem to be really into it. Pre-sales on Bandcamp have been the best we’ve seen, and stores appear to be gobbling them up. We have almost no more copies available in the U.S, which is great! With four releases in the discography, I think people are starting to notice the consistency and willingness to take risks with each package musically as well, something we hope to continue building on with future releases.

EG: What’s the inspiration behind ‘The Bankle’? What’s the concept behind this compilation?

ADMN & Francois Dillinger: The Bankle is a legendary venue that has been running after-hour events since the 90s, with parties done by labels like Plus 8 and I’m sure many, many more. There is a mirror disco ball Plastikman cube that is a fixture in the building that is pretty rad on the display by the current tenants, The Avant Garden Collective. And as with all of the label’s releases, we’re exploring spaces across Detroit like The Bankle, which operated in a time when the Infoline was king. The music on the records also intends to evoke a sense of past, present, and future across the vibe of tracks on each release.

EG: How did the track selection come together? Where and how did you guys connect? And the rest of the artists?

ADMN & Francois Dillinger: The music selection process starts with our core artists submitting music we believe would be ‘Infolines’. We then get together and listen to the music and ultimately only release what we are all unanimously into. It’s fun for us to be able to get in the same room and bond over the music we are so passionate about.

“As with all of the label’s releases, we’re exploring spaces across Detroit like The Bankle, which operated in a time when the Infoline was king. The music on the records also intends to evoke a sense of past, present, and future across the vibe of tracks on each release”

EG: When and how was Infolines born? What’s the ethos behind this project?

ADMN: Infolines began as an idea between Aran Daniels and Mike Petrack of Remote Viewing Party, and myself. We have been good friends for years and both wanted to start something new where we could release quality music on vinyl, but also have top-notch artwork with a solid theme that speaks to who we are. Both of us grew up in rave culture, so when we approached Francois Dillinger (Ben Worden) & Ashely Worden to help with the branding, they brought Infolines to the table, which was the obvious choice. It’s been a wonderful experience to showcase the artistic talents of Ashely on each record, but also give a nod to the history of the culture that helped shape us.

EG: What can you tell us about your contributions to this particular release? What was the inspiration behind them?

ADMN & Francois Dillinger: Our collaboration was a tune we wrote that maybe got started around 2017, but it is a straight 4 to the floor minimal bass crusher. It went through several renditions until it reached its current state, but we are both happy with the results. Both of us grew up listening to electro and minimal, so those vibes definitely cut through. 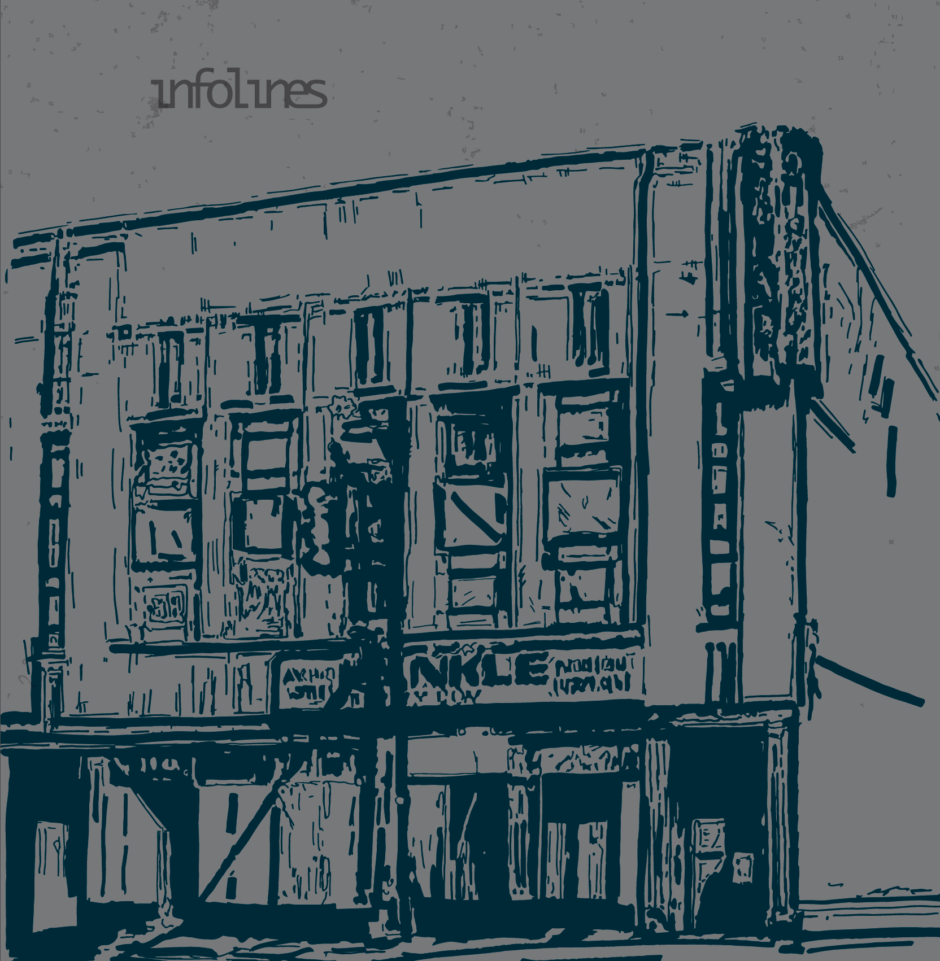 EG: ADMN, you are a network engineer, right? Is there a connecting line with electronic music production? Are there parallelisms to be drawn there? Or are they two wildly different activities? How about you, Francois?

ADMN: Definitely. To produce electronic music, you have to be a certain level of geek. This stuff isn’t the easiest to figure out. Network engineering is all about organization and data flow. Audio engineering isn’t very different. Signal flow is everything, which is where I think they draw the most parallels. For me, the more organized I am with my writing, the more creative and productive I can be during the writing process.

Francois Dillinger: I’m a marketer and designer by trade, during the daylight hours. I’m lucky enough to get to translate Ashley’s artwork into each sleeve design and was able to design the logo mark for the label as well. I find a lot of my creativity in design compliments how I approach writing music in the studio as well, starting off very free-flowing with long periods of ideation, and then becoming more structured and focused on minutia toward the end.

EG: How did you guys first get into electronic dance music? Was there a record or track that blew you away?

ADMN: This one is deep. Aphex Twin is the first electronic music artist that I was exposed to when I was 6 or 7 years old. I was a punk rock kid for most of my formative years but was exposed to Plastikman/Richie Hawtin early on when I started going to parties. I guess you could say those artists who started me on the path I am currently on.

Francois Dillinger: Anthony Rother’s ‘Don’t Stop’ really gripped me, but I blame my early days of being obsessed with Dave Clarke for that. I started going to parties seeing mostly techno DJs but collected a lot of electro records from Europe. Over time I found myself toggling between genres as all those influences converged. Overall, though, I was introduced to electronic music through my teenage interest in industrial music. I went to all sorts of shows in Detroit as a 13/14-year-old, seeing bands like Front Line Assembly. I even had a small industrial band in my high school days, but once I started going to parties that transitioned me from mosh pit to dancefloor.

“We get together and listen to the music and ultimately only release what we are all unanimously into. It’s fun for us to be able to get in the same room and bond over the music we are so passionate about”

EG: What should we do on a night out in Detroit? Where would you guys take us to?

ADMN: TV Lounge, Spot Lite, Marble Bar, then any underground afters you can find (not going to mention locations here. 😊).

Francois Dillinger: All I’ll say is that Alex is the local celebrity of the two of us, so if you want to go out on the town and see behind the curtain, he’s the guy to hang with.

EG: What else can we expect from ADMN, Francois Dillinger, and Infolines in the near future? What new milestones are you looking out for in the coming months?

ADMN: I have been in the studio heavily since the new year. I have a couple more vinyl releases secured, an original on the next Detroit Electronic Quarterly (DEQ) compilation, and a remix for Acid Jerks due for release on Refuge AUS. Also, some huge gig announcements too (something in Detroit in May…hint hint). In the Infolines camp we are working towards finalizing 005 and 006 and something extra special in the art realm for 2023, so stay tuned!

Francois Dillinger: I am working on a ton of new music that will eventually come out this year or next year (vinyl plant delays and full release calendars seem to be par for the course these days). I’ll be performing a new live set for a few shows this year and will continue to publish my ‘MINDFRAME’ monthly radio show on Deep Space Radio every month.

EG: Thank you so much for your time guys! We wish you all the best for the future!

Infolines’ ‘The Bankle’ VA is out now. Purchase your copy here.