Born in Rio de Janeiro, Bernardo is one of the biggest representatives of electronic music in Rio. His career started to blossom in 2008 when he conquered club residencies such as Fosfobox, Dama de Ferro, and Clandestino. Since then, he has shared the stage with names like Laurent Garnier, Moodymann, Carl Craig, Mark Farina, Solomun, Booka Shade, Jamie Jones, Magda, and Anthony Rother, among others, while his own productions have been supported by Maceo Plex, Maya Jane Coles, Jamie Jones, Groove Armada, Mandy, and Robert Owens, just to name a few.

EG caught up with Bernardo Campos to talk about his origins, workflow, his Nu Azeite duo, the drop of their ‘Vem Pro Mar’ album, and much more.

EG: Hi Bernardo! Welcome to EG. It’s a pleasure to have you here with us. Where are you based right now? How have you been?

Bernardo Campos: Hey guys, thanks for having me here 🙂. I am based in Rio de Janeiro, which is my hometown. Things have been great here with a pretty busy schedule.

EG: So, what has your winter been like so far? What have been some of your favorite highlights?

Bernardo Campos: Winter in Rio is pretty chill, we don’t get too much cold in this part of the globe, but I went to Chile to play for the first time, in the cordillera. That was amazing and for sure a highlight of the winter for me.

EG: Let’s dive right into it and get to know you better! Do you remember your first interactions with music? And when did electronic dance music come into the picture?

Bernardo Campos: My first interaction was listening to records with my parents. I was blessed that they were listening to a lot of good music, so that was really a very good starting point for me. In terms of dance music, first I went to a rave when I was 16, it was trance music. Then I started listening to techno and house and going to the city clubs when I was 18. A couple of years later I began DJing.

EG: Was there a record or show that pushed you into wanting to become a DJ & producer? What were your early days like?

Bernardo Campos: The first time, I went to a club called Fosfobox. That was the turning point. There was only one DJ playing all night long, his name is Maurício Lopes. He played from acid jazz to hard techno, an incredible journey of music. After that night I wanted to become a DJ.

“My first interaction was listening to records with my parents. I was blessed that they were listening to a lot of good music, so that was really a very good starting point for me”

EG: Now, into productions…Did it take you long to find your own sound? How has your sound evolved since you first started producing?

Bernardo Campos: I produce a lot of different stuff. I feel like you need to follow inspiration instead of just making stuff that is going to be commercially acceptable, so each day in the studio is different for me. I like making House music as much as I like making Downtempo, Boogie, and Brazilian music.

EG: What does your studio look like at the moment? How would you describe your creative process? 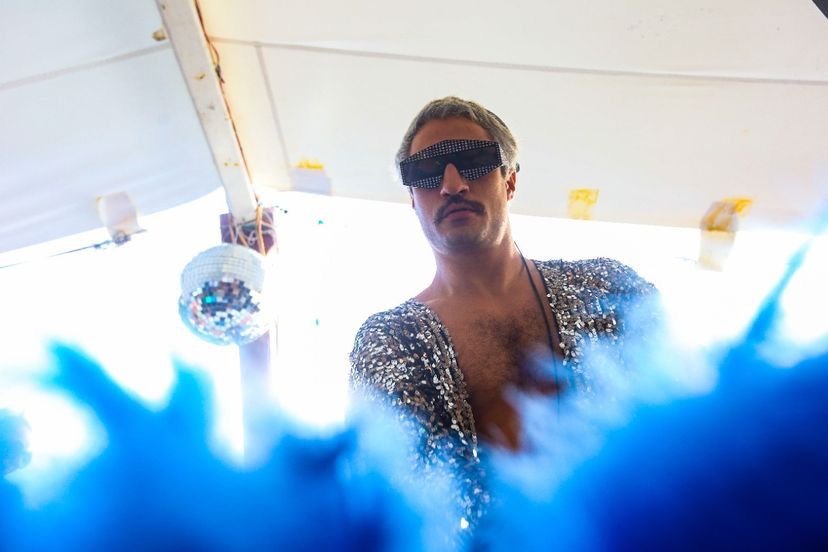 EG: By the way, you’re also one-half of the Nu Azeite duo. What are you guys up to at the moment?

Bernardo Campos: We just released our second album, ‘Vem Pro Mar’, and we are playing at Rock in Rio festival, which is beyond something we could only dream of, as we are pretty new to the scene. So we are super happy with how things are going 🙂

EG: And what can your fans expect to find on your new album?

Bernardo Campos: It’s a modern interpretation of Brazilian Boogie, from the 70s and 80s. With elements of trip hop, funk, soul, and house music.

“We just released our second album, ‘Vem Pro Mar’, and we are playing at Rock in Rio festival, which is beyond something we could only dream of, as we are pretty new to the scene”

Bernardo Campos: I think after the pandemic the scene burst into something really cool. People are paying more attention to the artists and attending parties and festivals. It’s a really good time for music again!

EG: What’s next for Bernardo Campos? What particular milestones are you looking forwards to now?

Bernardo Campos: I became a vinyl freak lately, digging, collecting, and playing records. And I have an upcoming vinyl from myself and Bruce Leroys coming out probably at the beginning of next year. I also have some cool releases on the line with Tree Sixty One, Cocada, Moiss Music, and more. On top of that playing a bunch of gigs, so pretty busy 🙂

EG: Thank you so much for your time, Bernardo! We wish you all the best for the future.

Bernardo Campos: Thanks so much for the space guys, and keep up the great work! ❤️