Dominik Eulberg: “Nature always soothes my soul and is the easiest, healthiest and most cost-effective key to happiness for me”

Attempted by so many people vainly, Dominik Eulberg is the one who can claim for himself having reconciled ornithology and techno successfully. Dominik Eulberg, raving ornithologist from the Westerwald is both: an international booked DJ in spotlight and an observer of the domestic Flora and Fauna in quiescence – a master of reconciled contradictions.

He uses nature as a contentual and dramaturgical source of inspiration for his productions since 1993. The creativity of his musically work will stay complex and innovative, but remains always accessible due to the inherent down-to-earthness. After all one wants to take his audience on a journey, not wanting to ditch it at the ticket counter.

We caught up with Dominik Eulberg to talk his upcoming album ‘Mannigfaltig’.

Electronic Groove: Hi Dominik, thanks for your time today. How do you portray what emotion you feel when immersed in nature and turn those feelings into sound? Is it a direct route as such, or does it take time to create how you feel?

Dominik Eulberg: Thanks for the invite. I try to feel the emotions of nature with my senses wide open. The more mindful you walk through nature, the more you will experience its wondrous beauty, even on the smallest scale. I also have the approach to experience nature in a contemplative way, just enjoying it and allowing the impressions to sink without any intention to change something. After a while I am in a meditative, transcend state of mind, where I can feel the essence of being much better. This deep, primal feeling is giving me an impulse and guideline to create my music like a painter, painting a picture of the experienced nature, adding layer by layer.

EG: Is there a particular aspect of nature that inspires you the most, what role does it play?

Dominik Eulberg: I am always thrilled and fascinated by the variety of colors and forms, created by evolution. Especially in the world of birds and butterflies you can see this manifoldness as extremely splendorous. Looking at the species side by side, they appear like a precious collection of gemstones. This abundance of beauty fascinates me so much because it was also my childhood entertainment program. I grew up without television, I spent every day in the woods and the meadows in my home region.

I studied all the native flora and fauna, read as many books as possible about it. This manifoldness was my daily source of pleasure. Nature always soothes my soul and is the easiest, healthiest and most cost-effective key to happiness for me. I just need my binoculars, nothing else. In addition, beauty in nature is no coincidence. Some beauty in nature has no directly recognizable species-specific meaning to us. For example, colorful butterflies do not find each other due to their wonderful patterns, but because of sexual attractants. Breathtaking nacreous structures of marine gastropods are constantly obscured by algae. Who does this elegance serve? In my opinion all this beauty has something life-affirming that other living organisms can feel and enjoy, because everything in nature has one origin. Creatures are not efficiency-driven machines, but sensitive beings with feelings.

EG: You’re inspired by the atmosphere around you, do you hope that your music will then go on to inspire others to feel the same way?

Dominik Eulberg: First of all, the inspiration by nature is a wonderful guideline for me to compose melodies and doing arrangements. Making music is nothing else than selecting out of infinite options. After this note, I can play that note with this synth or that synth. You can easily drown in a sea of options. This is one aspect why I have a finished concept before I start to make music. I select an aspect out of nature which I interpret musically. The track ‘Siebenschläfer’ of my album for example: During writing this song, I have this rodent phenotypically and with its habit in my mind. Now I have a clear red line which kind of picture I want to create. Of course, this picture is something very subjective, influenced by my experiences and individual feelings. But I think that by and large everyone understands the joy and grace that I feel.

EG: What attracted you to nature and creating a soundtrack that represents this?

Dominik Eulberg: We humans are often already so far alienated from nature that, for example, we speak of passion for nature as a hobby. This is completely paradoxical and almost perverse to me. We wonder what good a Sunday walk in the open air does – we should rather wonder about the negative impact of climbing from one square box into another square box and then another square box, and then to staring into more square boxes. As a small reminder: The Neolithic Revolution was just 10,000 years ago. Before that, humans and their ancestors were living physically in nature for almost two million years. Nature is and always will be our mother on this planet who nourishes us. We need her. She is our livelihood.

EG: Do you find similar sounds in nature as you do in electronic music?

Dominik Eulberg: The repetitive pulsation of life cycles is mirrored in electronic music better than in any other type of music. All over the world we find people who dance to monotonous 4/4 rhythms in trance-like states. This is probably because we are prenatally conditioned to the monotonous heartbeat of our mothers. Electronic music is for me the most instinctive form of our music culture and therefore the most natural. Of course, there are also some explicit natural sounds that sound like oscillators of synthesizers. I am thinking of the nightjar, the red-bellied-toed or the echolocation calls of bats. In former times I used to sample them a lot and incorporated their sounds into my music because it was the most straightforward way to combine my two passions and lack the money for expensive synthesizers. 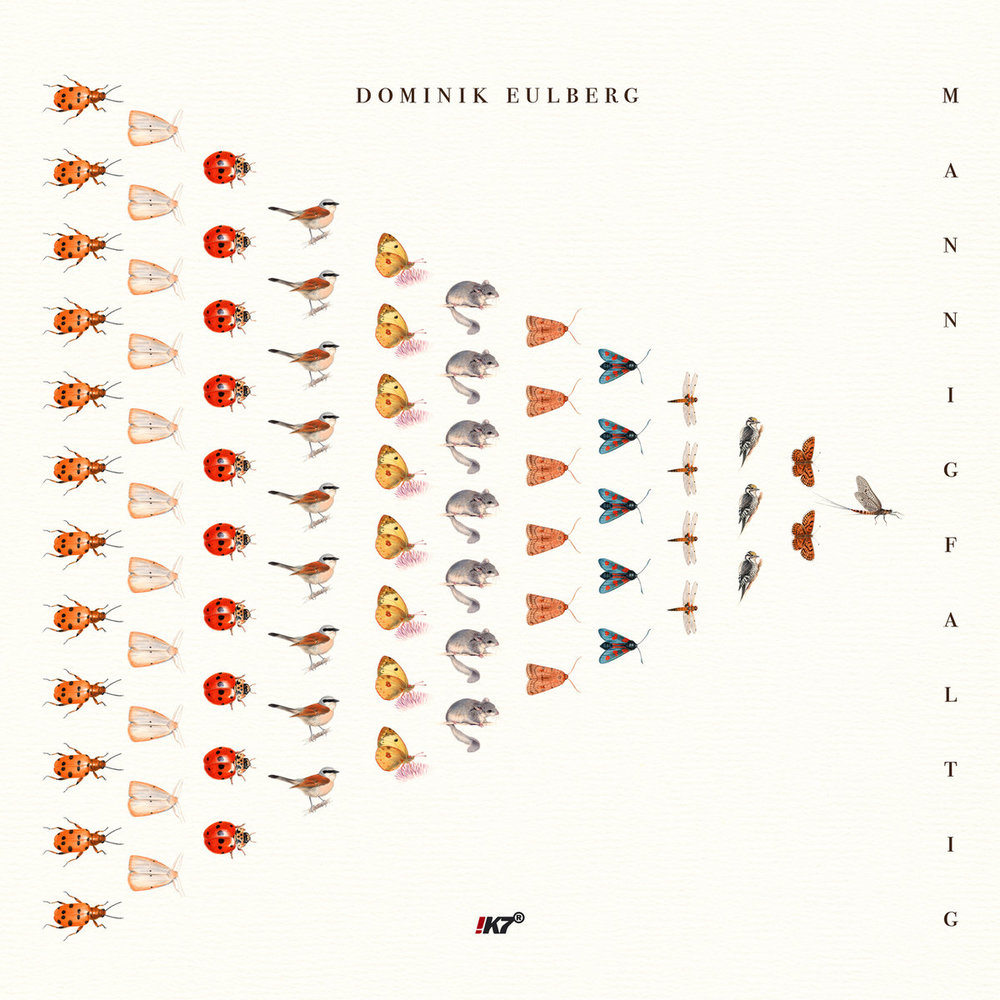 EG: Can you explain how the album came to be entitled ‘Mannigfaltig’ and why you feel it’s important to raise awareness around our environment?

Dominik Eulberg: With twelve colourful pieces of music, I want to create a positive plea for the breathtaking beauty of our biological diversity. But I also want to raise awareness of their importance to us humans. Moreover, I want to encourage reflection on the ever-increasing degree of their threat by us. I came up with the idea for my new album’s concept during a hiking tour in my home region Westerwald a few years ago.

On a flower meadow I spotted a yellow-luminous butterfly which has a figure-eight shaped pattern on its outer wings. Therefore, his name is literally translated as ‘golden-eight’. Then I saw a very special songbird in a blackthorn bush. It stores food for bad times by spearing its prey on spines. Formerly it was thought he would kill nine before eating one. Hence it is called as much as ‘nine-slayer’ in German. Shortly thereafter I heard the calls of a dormouse in a forest, a rodent that owes its German name to the long hibernation. Its verbatim translated name is ‘seven-sleeper’. Thereupon I thought: “Wait a minute! Nine, eight, seven?” I spotted the causal chain, went further and found for every number from one to twelve a name of a native animal species. So diverse is our nature, or more beautifully expressed so manifold. This is why the album title is ‘Mannigfaltig’ (which means ‘manifold’ in German). I named each track number from one to twelve, after those ‘numeric’ animals in my mother-language German.

EG: The album itself is highly emotive. Was the aim to create something that people could connect with and take a minute to stop and think about their own biodiversity of which they live and move around in?

Dominik Eulberg: Musically I wanted to create a manifold and positive record, a mosaic of many small pleasures that can be listened to in a range of settings, from comedowns to long drives. I put a lot of effort and details into each track. So, you can listen to them very often and it is possible to discover something new each time. Of course, the most beautiful setting would be along with contemplative observations of nature, for that is indeed its origin. On a conceptional meta-level, I want to use this musical platform to advocate for the importance of biodiversity. It is my mission, and even the meaning of my life, to sensitize people to nature. The threat to it from human behavior has never been more real, with more species than ever before dying out in such short spaces of time. This record is my attempt to point out the importance of giving our animal friends back the space they need. Our survival and that of future generations depends on a thriving biodiversity. It is a kind of life insurance for us.

EG: Can you tell us about your approach to writing the album?

Dominik Eulberg: For me, nature is the greatest artist of all. It is the main inspiration source for my creative activity. On this album I wanted to mirror the endless variation of nature and highlight the entire colour-palette of life. During its creation-process I always looked for an innovative momentum, and never tried to imitate anything, or even myself. My musical motivation was always intrinsic, I didn’t care about trends. I just made this kind of music, which came out of my mind and feelings. I think it is a personal advancement thanks to new production techniques, new equipment and allowing myself even more to be and sound like myself.

EG: It’s been more than eight years since the release of ‘Diorama’, why is now, the right time in your career to release ‘Mannigfaltig’?

Dominik Eulberg: The last few years went by with intensive touring and nature conservation tasks just as in flight. Only two and a half years ago, I really realized how long ago my last album was released and thought to myself: “It’s time again”. In addition, I felt “pregnant” to give the world a new album. Music only makes sense to me if it has something to say. And I had something to say! I feel that I have found a holistic and fulfilling way to use my musical platform to continue to advocate for the importance of biodiversity. I am constantly working on nature preservation, am also a conservation advisor and ambassador. At this meta-level, therefore, I also had an apodictic urge to give people a piece of advice for life.