Gabriel Evoke: “Follow your truth, don’t be despate for fame or money”

The chance of collaborating directly for the development and consolidation of something positive is, by far, one of the noblest actions. Gabriel Evoke has collaborated with the Brazilian alternative music industry in some good and accurate ways. DJ since 2005 and producer since 2010, the Brazilian artist is one of the pioneers in Brazilian territory to bet on a minimalist survey of House.

With an established relevance, Gabriel felt it was time to step up and go forward. Whether through BeCool, his label party, his EVK Studio, where he teaches DJing, and electronic music production, in addition to offering mixing and mastering services, or his Namata label (where he has hosted releases by names such as Aninha, Lee Pearce, or Leo Janeiro), Evoke is an absolute constant in the Brazilian landscape.

EG caught up with Gabriel Evoke to learn more about his trajectory and Namata label, responsibilities, his future projects, and more.

EG: Hi Gabriel, welcome to EG! How are things out there and how have the dynamics of recovery been for you, now with Namata in full activity?

Gabriel Evoke: Hi EG, thank you very much. It’s a pleasure to be speaking with you. The machine is running at full speed, both I, Gabriel Evoke, and Namata have a solid release schedule. Soon we will announce our next EP’s and some debuts on the label. We also launched Namata as a label showcase. Since the green-lighting of events in Brazil, we have already held three editions, including a showcase at D-Edge, one of the main underground clubs in the world. This year I’m completing three years as Namata’s label head and I’m preparing some news that I’ll share during the year.

EG: Before we delve into all the pertinent topics, let’s contextualize who is Gabriel, for readers. What do you think led you to music and how were your bonds definitively established?

Gabriel Evoke: Gabriel is a person who dreams big and struggles daily to achieve his goals. A person who is disciplined, dedicated, and obsessed with his work, yet patient and resilient, knows that a solid job is not built overnight.

It may sound cliché, but I believe that music has always been present in me. Since I was very young I remember buying CDs in local stores, at 14 I was already going to clubs in my city, and it didn’t take long for me to become a regular at rave parties. I started playing in 2005, but it was only in 2009 that I had the courage to follow my dream of living only from music and for music – the same year I started music production.

EG: And which were and are your influences? It’s interesting to reflect that in 2005, minimal was still almost emerging in Brazil, so you really raised a flag.

Gabriel Evoke: In these almost 17 years as a DJ, and 10 as a producer, I experimented with different genres until I settled on minimal. I started playing psytrance in 2005, a genre that is very strong in the Brazilian scene. At that time, artists like Astrix, GMS, Sesto Sento, and Sub6 were present in my cases.

So, in 2010, I used to play a bit of minimal, a completely different Minimal than what’s been going on today, more Techno-driven. Then I started to play and produce Tech House, but the genre went down a path that no longer represented me, so in 2018 I decided to focus on Minimal House, and since then I have focused my work on that sound. ANOTR, Demarzo, Traumer, DJ Steaw, and Josh Baker are some of the artists that have inspired me these days.

EG: Can you recommend two of your productions for us? A very old and a recent one, in which we can appreciate the evolution of the artist.

Gabriel Evoke: I selected two tracks, which despite a good period of creation between them – ‘Strobe’ from 2016 and ‘No Soul For Sale’ from 2022 —, present a lot of my characteristics as a producer: songs with groove, nice vibes, some freaky ideas, striking and unconventional synths, working with a few elements, only the necessary, taking into place that “less is more”.

“Gabriel is a person who dreams big and struggles daily to achieve his goals. A person who is disciplined, dedicated, and obsessed with his work, yet patient and resilient, knows that a solid job is not built overnight”

EG: 17 years have passed since your first steps into electronic music. What do you feel has remained intact (or more latent) over these nearly two decades?

Gabriel Evoke: Definitely my love for electronic music. Without that love and devotion to music, I certainly wouldn’t have the resilience to go through the difficult times I’ve had over the years – it’s very common in an artist’s career to have ups and downs. Music strengthens me in these moments, and every day.

EG: And since then you have also developed on several sides, right? Was ‘BeCool’ your first venture?

Gabriel Evoke: Yes, I seek to work with electronic music on several fronts. Whether providing services at EVK Studio, managing Namata Records, or producing our Namata label showcases. I’ve produced several events over the years, but today my focus is only on Namata.

Namata is a recent label, it’s only 2 years old. I created it during the pandemic. As I mentioned earlier, as soon as we had the authorization from my country’s government to resume the events, I launched the first edition of the Namata showcase. Since then, there have been three editions, with different proposals, ranging from outdoor spaces and contact with nature to super technological clubs. In fact, Namata is just that, mixing the organic with technology. 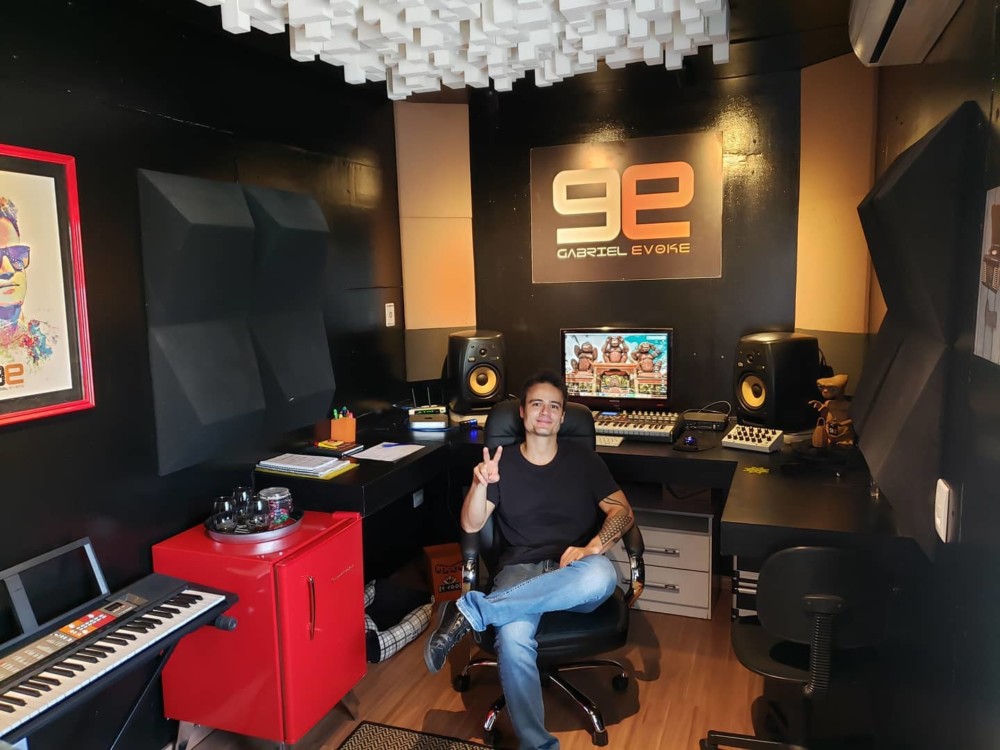 EG: Tell us about your work with EVK Studios? Can you highlight some interesting work you’ve already developed?

Gabriel Evoke: One of the most interesting and challenging jobs I produced at EVK Studio was producing an EP with Ian Urbina, investigative journalist for the New York Times. He spent seven years on the high seas, in the four corners of the world, investigating the most diverse crimes that occur in these lawless oceans, ranging from illegal fishing and piracy to pollution and slavery. My job was to produce songs that would support the chapters of the book, The Outlaw Ocean, in which Ian tells about his expedition. I worked with several samples of recordings that Urbina captured over the years. It was a very challenging job, but very enjoyable. It had repercussions in major media around the world, including Billboard. You can check it out on my Spotify.

EG: Almost two years ago you also founded Namata, a record label that has been building a solid catalog. How has it been working in front of a label?

Gabriel Evoke: It’s been quite challenging, as well as a daily learning experience. It’s a huge responsibility to work with materials from other artists, it takes a lot of professionalism and transparency. It is a job that requires a lot of organization, so that all preparation is kept within a schedule. Namata has been an important channel for promoting Minimal House in my country, and I’m very proud of that, as well as being a tool to connect with artists from different parts of the world who share the same musical vision. It’s been amazing.

“Without that love and devotion to music, I certainly wouldn’t have the resilience to go through the difficult times I’ve had over the years – it’s very common in an artist’s career to have ups and downs”

EG: On purpose or by chance, you generate a dynamic that is similar to exchanges, but through sounds. Is this what you intended?

Gabriel Evoke: Yes, definitely. Namata has been an important channel for me to connect with different artists from all over the world. The doors are open to national and international artists who have unique material to share with us. This is the central idea of the label. As in nature, where each being has its unique characteristics, I believe that each artist has something that makes him/her unique too, something original and true.

EG: What do you think about leaving any tips for those who are still trapped by insecurity or any other limiting beliefs? Thanks for the chat, Gabriel!

Gabriel Evoke: My advice is that each artist seeks to follow their truth. Don’t be desperate for fame or money. But idealize something true, something that is from your heart. Take a path that you look forward to and feel proud of the road you took. Today I live my purpose and that’s what gives me energy, courage, and joy to continue on my path, giving my best, day after day.