Parties4Peace prepares to honor its 16-year anniversary visiting Japan alongside Pier Bucci and Jon Charnis. Today we talked with her founder Emile McGlone to give us some insights about the Asian country celebration.

Pier Bucci is one of several Chilean producers who helped spur a musical connection between South America and Germany in the early 1990’s. But Bucci’s interest and involvement in electronic music began years before in the late 1980’s while living in Brazil, South Africa, and particularly in London, where he found an affinity for the music of English electronic label Warp Records. Pier Bucci’s family relocated to Berlin around the same time as the dissolution of Chile’s twenty-year dictatorship, and Chilean artists began moving back and forth between the two countries, bringing with them the sounds from the newly reunified Germany. At the time, Bucci began working out of his family’s home in Santiago, which had been known as an important activist art gallery during the 1970’s and 1980’s.

“In that time my house was an important cultural place. Underneath was an art gallery, a very important art gallery in Chile. My father owned it. And upstairs we had the penthouse where we produced electronic music and listened to electronic music…we’re talking about ’91, ’92, ‘93.”

Concurrently, artists who had relocated to Europe including Dandy Jack, Ricardo Villalobos, and Luciano, were organizing and performing in the country’s first electronic raves. 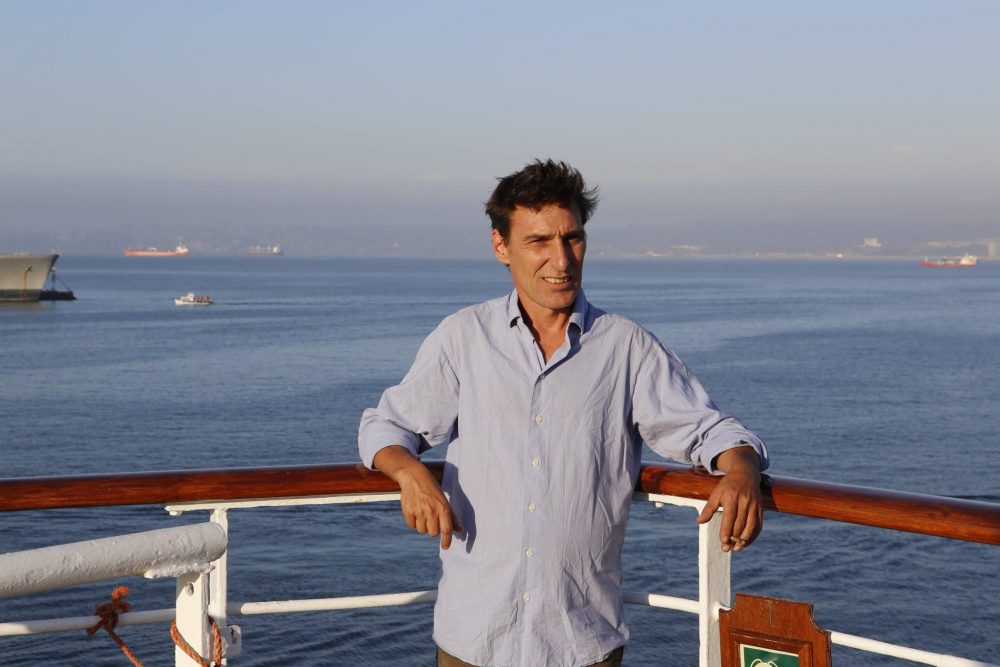 Dig through the records of Pier Bucci’s prolific production career, and you’ll find a decade’s worth of travel in the form of track and release titles: ‘Moscow’, in Europe, ‘Morocco’ in North Africa, ‘Machupichu’ in Peru, and the ‘Atacama’ EP in his home country of Chile. We had the fortune of catching up with Bucci as he was headed from Santiago to the remote island of Rapa Nui onboard the Peace Boat, where he was recording an album of indigenous music as part of the last leg of his two week Patagonica Tour in South America with the Music & Art Peace Academy (MAPA). The tour, organized by the non-profit event production and fundraising organization Parties4Peace, seeks to raise awareness about the unprotected nature in the region at the southernmost tip of Chile, which is currently under threat by plans to exploit the area for its natural resources. Bucci joined the tour as one of their guest artists, helping to raise awareness for the initiative in his homeland.

After visiting Patagonia for the first time on the Parties4Peace tour, Bucci’s fascination with environmentalism and exploration inspired a unique photo series by the artist himself while in Patagonia, an artistic means of representing the tour’s main focus. “I’m always inspired by traveling and the places I visit,” says Bucci. “Me and Emilie were talking about collaborating for nearly seven years. Now we’re at the end of the tour already, and it was a great experience. Of course, it’s always nice to visit your own country, and Patagonia has always been an interest of mine.”

Electronic Groove: Parties4Peace will be celebrating their 16 Year Anniversary in Tokyo, Japan – what’s in store for the lineup?

Emilie McGlone: We are excited to return to Japan at one of our favorite clubs – Contact Tokyo in Shibuya. This club has some of the best bookings in Japan for electronic music and we will be featuring Pier Bucci for a 3-hour live set in the main room, along with our longtime friend Shotaro Maeda and producer Dr. Shingo, who has played for Parties4Peace since our very first event in Tokyo back in 2002!

EG: This will be the first time that Pier Bucci returns to Tokyo in nearly three years. What can we expect from this Parties4Peace tour?

Emilie McGlone: I am excited to welcome Pier Bucci back to Japan together with Parties4Peace! Everyone loves his music in Tokyo and we have shared many special moments with him and his brother, Andres Bucci, when they both came to visit on tour. Over the past few years, Pier has been recording an album with indigenous music from our MAPA project in Rapa Nui (Easter Island) and we are looking forward to hearing some of the new dance music he has produced over the last year and a half while traveling on his exciting adventures in South America!

After our event at Contact Tokyo, we will be organizing a live stream in our favorite recording studio, DOMMUNE.com. The owner, Ukawa-san, is a fan of Pier Bucci and we organize an annual talk-event and music night there to highlight new projects with Parties4Peace with an aim to inspire others in order to work towards a more sustainable future through music and art. We also have an intimate boat party with a friend and Dj Jay Zimmermann coming up to celebrate Jon Charnis’ birthday in Japan! 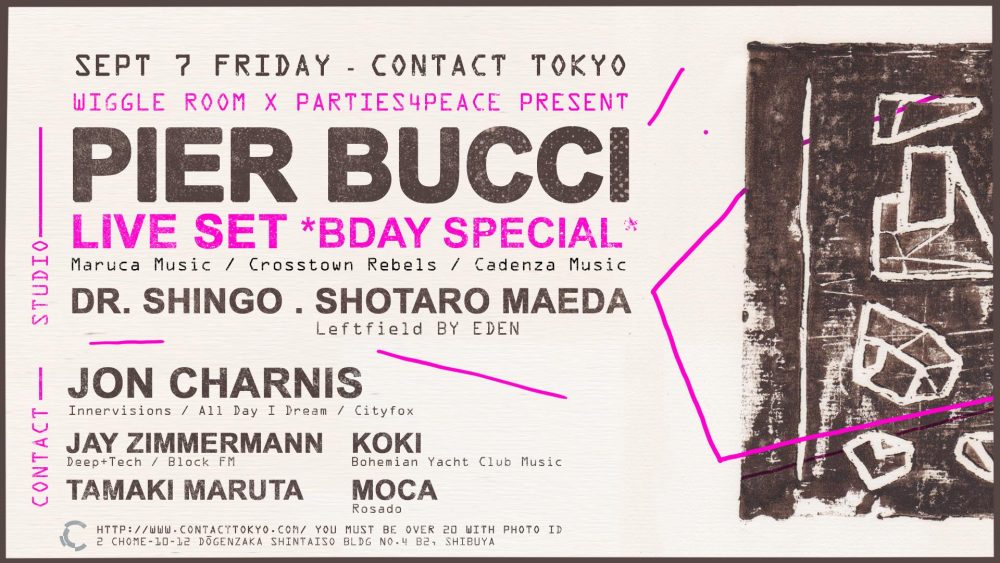 EG: Jon, this is your first time traveling to Japan, what excites you most about this trip?

Jon Charnis: I can honestly say that I’ve been inspired by Japan ever since I was a little child. It probably originated from playing many Japanese video games and watching Japanese Anime. But actually, as I’m responding to this interview, I just received a flashback of me learning the old Japanese folk song ‘Sakura’ in Elementary school in America. Somehow I still know the words today! I also remember even practicing Japanese calligraphy in art class at the same school. Japan has always captured my imagination; from its timeless traditional architecture, minimalist interiors, respect for nature and zen-like spaces, etc. I am sure it has a heavy role in my love of minimalist art. I cannot wait to dive into the old and new worlds of Japan. And of course, the food!

EG: How did you learn about Parties4Peace and why are you looking forward to playing for the non-profit organization for your Tokyo debut?

Jon Charnis: I learned about Parties4Peace after meeting the wonderful founder Emilie McGlone via mutual friends. I’m a big believer in what she’s doing as I’ve held my own fundraising events in LA-based around music. Us Djs are quite privileged to get to travel the world to play records. It’s important to give back any chance we have. One of the most beautiful things about this scene is that most of us are like-minded individuals with a deep-rooted respect for unity that transcends races/nationalities/sexual orientations. And also our respect for nature and our planet. So partying for a purpose makes perfect sense in these crazy times. 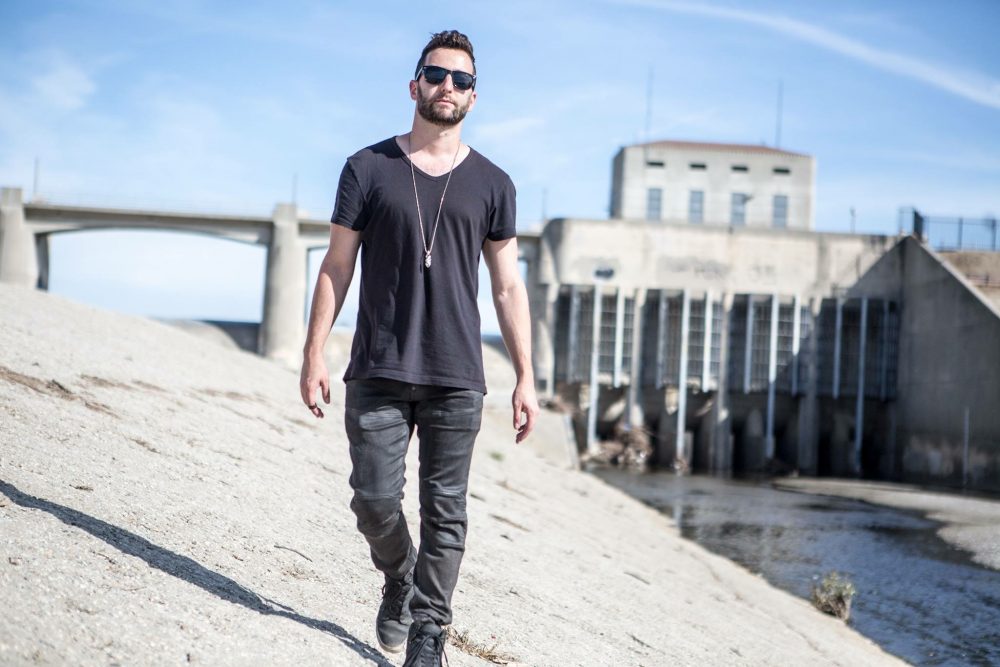 EG: How do you think that music and art can help create a better world?

Jon Charnis: I always tell friends when I travel and play shows abroad how similar things are at our shows. You can feel there’s a common thread between those who lead our type of lifestyle. And music is such an inherent way to get us to speak the same language. Art forces us to think in deeper ways that tap into our intuition, the same intuition that allows us to think we’re all part of something bigger than the divisions created by politics. Collaborative events like Burning Man are showing us whats possible on a global scale

EG: When did you first start playing music and how did it become your passion?

Jon Charnis: I started playing piano as a child. Eventually, I got bored of classical music in my young days. My parents bought me a Yamaha electronic keyboard and I would sit there for hours trying to re-create songs I would hear on the radio. But it wasn’t until a trip to Europe where I discovered Electronic music like the Prodigy where music became a true passion. I studied Computer Science in college and was absolutely fascinated when programs came out that let you make music on a computer. It was a natural progression then to get into this world. Today I’m into modular synthesizers and it feels like I’d come full circle of geekiness.

EG: Last year, Holmar Filippson joined Parties4Peace in Patagonia for their annual tour – you have played b2b many times with Holmar for Cityfox and other events. What would you say is so unique about the times you play together?

Jon Charnis: I remember when I first met Holmar at WMC in Miami. He was immediately excited to meet me as he was a big fan of music productions. At the time I was so honored because he was one of my heroes, I couldn’t believe it. So from the very beginning, we had a mutual music connection which eventually culminated in collaborating together in the studio. (This is where I have to plug my upcoming collab EP with Holmar on Cityfox!)
We’ve never planned our sets when playing b2b, yet we have this intuition that comes from understanding each other musically. Every time is different but more and more special as we continue this journey. Our last set closing out Cityfox was really memorable for me, all of our NY friends surrounded us and the energy was electric. 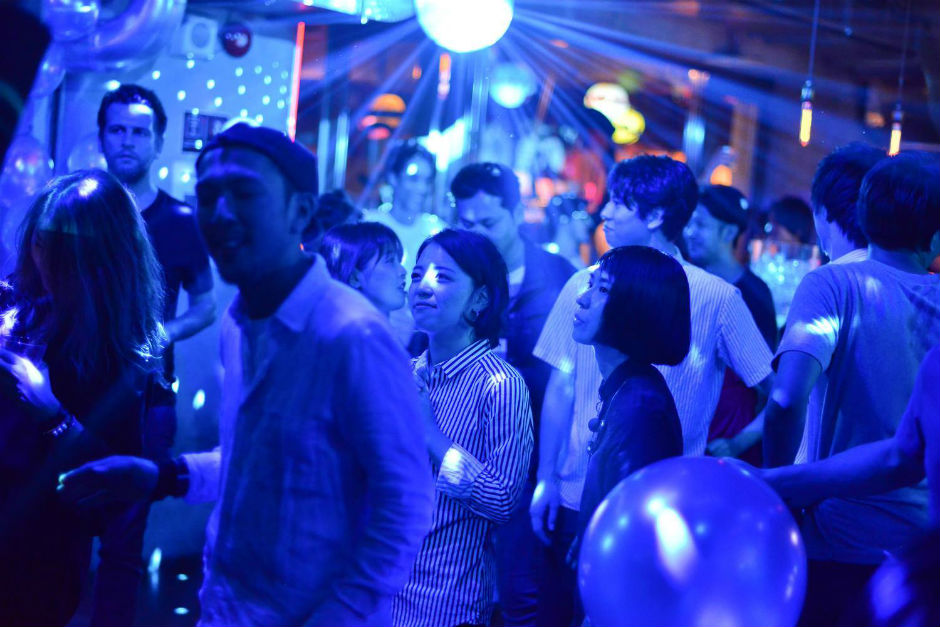 EG: What is something that you hope to share with the crowd in Tokyo?

Jon Charnis: I hope my set is inspired by my surroundings and that it translates to the crowd. It’s always tricky playing a new country for the first time, I’m just going to let go and hope we have an amazing communication on the dance floor. Of course, I will play some records by some amazing Japanese producers I admire like Kuniyuki Takahashi and Wata Igarashi, and record labels like Mule

EG: What does Peace mean to you?

Jon Charnis: Peace to me is simple. It’s realizing that humanity is best when it’s working together, not competing for a winner take all. We all deserve to have opportunities to create our own paths and find our purpose.

EG: Thank you, Jon, for this great interview on your Japan debut. Any last comments you would like to share?

Jon Charnis: Visiting Japan has been my dream since childhood. I’m so grateful to finally come to visit during my birthday and contribute to Parties4Peace in any small way I can.