Quivver & Dave Seaman: “You’ve got to be open and adapt to whatever direction things may take”

Dave Seaman is one of the original movers and shakers of the UK house movement. He has been DJing for over 25 years playing in over 70 countries around the world. He was the first editor of the clubbers bible, Mixmag, and has remixed and produced for everybody from U2 to Kylie and David Bowie to the Pet Shop Boys. Singer, songwriter, DJ, and producer John Graham, aka Quivver, began his production career in the early 1990s and is now regarded as one of the most revered figures in the progressive music scene today. Best known as Quivver, he’s produced under the monikers Space Manoeuvres, Stoneproof, Skanna, and Tilt; each one representing a different shade of his eclectic sound and proof of his true versatility.

Following the Covid pandemic, the pair have come together in the studio, creating a wealth of unreleased material that is brimming with newfound purpose and renewed energy. Now, as the pair are poised to share their new collaborative outing ‘She Fly’, EG caught up with Dave Seaman and Quivver to learn more about their team up, their new release, plans for the future, audiobooks, and more.

EG: Hi John! Hello Dave! Welcome to EG. It’s an absolute pleasure to have you here with us. Where are you based right now? How have you been?

Quivver: We’re currently in my studio just outside Coventry. Just put the finishing touches on our next release for Poker Flat Recordings and are about to start something brand new…Currently going through our favorite tunes of recent months to find a direction we both wanna go in, then we’ll start something and go in a different direction completely if it’s anything like last time (laughter).

EG: Sounds like you guys are on a roll! What has your Summer been like? Any favorite highlights?

Quivver: The highlights for me were Glastonbury. Had such a great time there this year – maybe it was because it was such a long wait since the last one, but there was something even more magical than usual about it. The other highlight for me was my new favorite festival, Noisily. It’s a fairly small festival here in the Midlands, maybe 5000 or 6000 people, but they’ve created a really special vibe there in a great location and the weather was perfect.

Dave: It’s just been nice to have some sort of normal summer this year after the stop/start nature of 2020 and 2021, but if I had to pick one event, I’d probably say Latitude Festival. I played there together with Danny Howells and Darren Emerson and had the whole family there with me camping for the weekend. We also had glorious weather, so it was particularly special and memorable.

EG: Congratulations on the release of your first collaborative single ‘She Fly’. We’re loving the old-school deep vibes! You must be very excited to share this one. What has the initial reception been like?

Quivver: Yeah, it’s been great. I think we’re just really happy to finally be releasing something as we started working together back in January 2020, so it’s been a long time coming. We started working together just as Covid hit, which obviously threw a spanner in the works, but we just continued in fits and starts, and over the last couple of years, that has now become quite a body of work.

“We’ve known each other as friends for many years. We have a similar musical outlook and have moved in the same circles for longer than we care to remember, so the transition into the studio was an easy one”

EG: How did ‘She Fly’ come about? Is there a concept or story to this one? Is it harder to run with a concept on a collaborative process when compared to producing solo?

Dave: It started life as an idea John had for his ‘Revelate’ album for Bedrock, but it was one of the first things we worked on together and the first thing we actually finished. We only sent it out to a couple of labels and Frankey Beckers came back immediately asking to sign it to Sum Over Histories, which we were over the moon about. We love what he and Sandrino do, so it’s an honor to start our new project with them.

EG: And ‘She Fly’ is just the beginning, right? Have you been working together for a long time now, or did you guys come into a “hot streak” in the studio?

Dave: It is just the beginning, yes. As John just mentioned, we’ve also signed another EP to Steve Bug’s Poker Flat imprint, which we’re particularly excited about, and there’s also something that Renaissance has picked up, but we have dozens of tracks on the go, so hopefully, things will be coming thick and fast from now on. 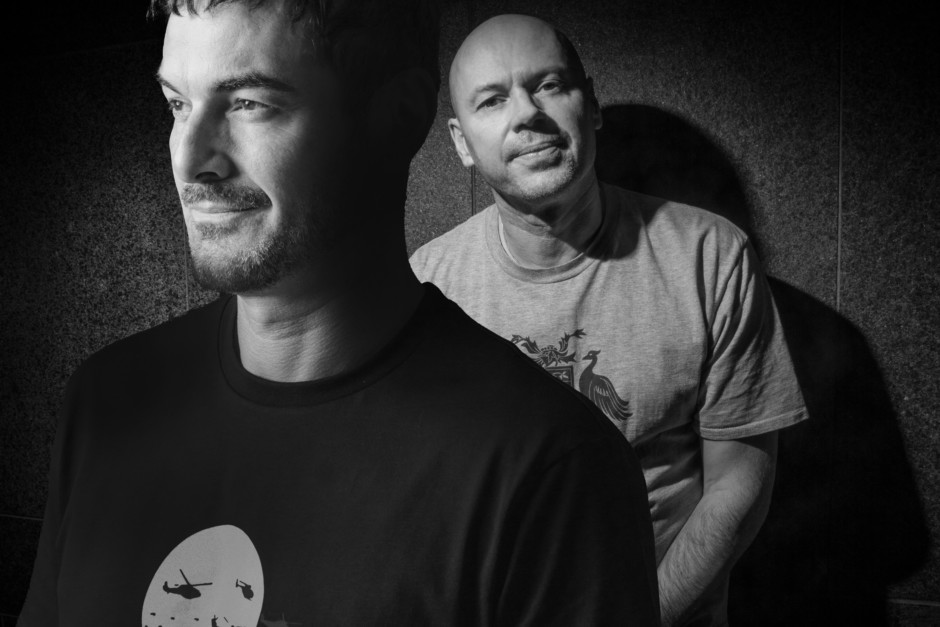 Dave: We’ve known each other as friends for many years. We have a similar musical outlook and have moved in the same circles for longer than we care to remember, so the transition into the studio was an easy one. We work together at John’s home studio and obviously, John’s production skills are legendary, so I just try to compliment the process in as many different ways as I can. There are a lot of collaborators involved in the music we’ve worked on, so facilitating all of those has been a job in itself.

EG: According to your experiences, what is it that makes a collaboration “successful”? What should one be on the lookout for when thinking about collaborating with someone else?

Dave Seaman: Go with the flow. Like any production, you’ve got to be open and adapt to whatever direction things may take. I don’t think it’s ever good to have a rigid idea of what the outcome should be and that’s even more so the case when collaborating.

“We’re also looking forward to getting out on tour doing some back-to-back DJ sets. It’ll be fun to get out there and travel together, not that we’ll be talking to each other much by the sounds of it, as we’ll both be too engrossed in our audiobooks!”

EG: How do you guys keep entertained when on tour? Have you come across any good movies, books, or albums lately?

Quivver: Noise-cancelling headphones are the way I stay sane while traveling. Best investment I ever made. It’s nice to be able to switch off the outside world and disappear into either music or audiobooks. Radiohead gets the most play by far while I’m traveling. For some reason, their music seems to fit perfectly with the feeling of being a lonely traveler. A few audiobooks I’d recommend would be ‘Threepenny Memoir: The Lives of a Libertine’ by Carl Barat (from the Libertines), ‘Breath’, by James Nestor, and ‘A Guide to the Good Life: The Ancient Art of Stoic Joy’ by William B Irvine.

Dave Seaman: There’s a never-ending stream of culture these days that boredom really is a long-forgotten concept. The best movie I’ve seen recently was Baz Lurhmann’s ‘Elvis’ biopic. And my current series obsession is Top Boy, which somehow passed me by originally. I’m also big on audiobooks, especially biographies, and even more so when the author is narrating. Jarvis Cocker’s ‘Good Pop Bad Pop’ and Fat Tony’s ‘I Don’t Take Requests’ were both recent favorites.

EG: What’s next for Quivver & Dave Seaman? What particular milestones are you looking forwards to now?

Dave: Obviously looking forward to releasing more and more of the music we’ve been working on. We have one track in particular that uses a huge vocal sample I came across when going through all my old vinyl during Covid, but we still haven’t managed to clear it yet, so we are just praying that the sample clearance Gods shine down on us for that one.

Quivver: We’re also looking forward to getting out on tour doing some back-to-back DJ sets. It’ll be fun to get out there and travel together, not that we’ll be talking to each other much by the sounds of it, as we’ll both be too engrossed in our audiobooks! Haha!

Quivver: Been a pleasure. Thanks for having us.

Quivver & Dave Seaman’s’She Fly’ is out on Sum Over Histories on Friday 16th September. Purchase your copy here.