Voigtmann: ‘All my creative work revolves around what I know best – architecture’

Claus Voigtmann is the co-founder of London’s most underground and conceptual party, Toi.Toi.Musik. With sublime dedication to Djing and music production Voigtmann has patiently acquired the respect of his peers in what is considered to be remarkable achievements in such short time. That goes not only for his Dj sets at his very own Toi Toi in London but also Fabric, Rex Club, Off-Sonar parties, festivals, Berlin clubs such as Club Der Visionaere and many other warehouse parties and clubs but also by developing his production skills. Voigtmann is an artist with an ever increasing catalogue of knowledge, taste and skill, providing what appears to be a long road ahead of him. Claus is highly appreciative of the art of mixing and in love with his vinyl. An architect, designer, DJ and electronic music producer he is fearless and defiant to trends and hype.

We had the chance to talk with Voigtmann about his musical background, Toi.Toi’s philosophy and London life.

Electronic Groove: Hey Voigtmann, thanks for your time to chat today. You juggle between the roles of DJ, Producer, Promoter, Label Owner… and an Architect day job. Do you have a twin hiding somewhere?

Voigtmann: Hi guys, thanks for having me. I wish I could clone myself sometimes. It’s all possible, it just takes careful planning and some will to achieve all of it. Most of the time it’s amazingly rewarding. I love what I do so it’s not a problem.

EG: Which of those roles are you the most excited about these days?

Voigtmann: They come and go in sine waves… I am producing my album at the moment which is a huge buzz and a personal challenge. Then again, I have a pretty busy summer schedule, with really exciting DJ gigs – this is just equally exciting. In architecture, I run my own project and I’m designing a high-profile exhibition for 2018 at one of the biggest museums in London – this is a passion for me too. Let’s say I get bored quickly and need action very often ☺

EG: Some artists consider they need to be available full-time (and don’t work) as you never know when creativity strikes. How do you handle that?

Voightmann: That’s right, creativity can strike anywhere, anytime. Wherever I am during the day, there’s always a laptop nearby. Which is necessary if I need for example to sketch out a melody. I have lists of track names, write down notes or ideas, I also send myself emails. There’s always something going on up there while doing maybe a monotonous task in architecture. It makes it even more exciting to hit the studio afterwards.

EG: How does your life as an Architect impact your music?

Voigtmann: I think in textures, patterns and structure.

EG: Do you include things such as physical space, volumes, and other visual/physical notions in your music productions?

Voigtmann: All my creative work revolves around what I know best – architecture. For example, I design all graphic content around Toi.Toi.Musik. In music, I systematically think out a track buildup as a 3-dimensional stage – certain instruments sit at certain places, depths in a 3D spectrum. I think my mind is trained to do so and it makes it easier for me to have the physical image of sound as a form of matter if that makes sense.

EG: What are your weapons of choice in the studio?

Voigtmann: There are plenty – I love the Moog Voyager, it’s bassline heaven. The Roland Sh101 sequenced with an Oberkorn sequencer is simply sublime. Analog Rhythm. The best synth ever for me is the Oberheim OB6 – we used to have one in the studio and I fell in love with it. Unfortunately, I do not own one. I also do a lot of sampling…almost every track has a vocal snippet used almost as an instrument rather than words.

EG: You’re a trained guitarist. Would you say that has an impact on how you approach your music (DJ sets, productions, events)?

Voigtmann: One impact it has been having, is that I am way too focused on melodies rather than plain grooves…it can become very annoying when you make the music I make ☺. Sometimes there’s nothing better than a simple breakdown to a kick drum in a track.

EG: Can you tell us the influence your father has had on your approach to music (even if his music was different)? Do you think there’s a similarity between his music at his time and yours now?

Voigtmann: My father showed me an artist called David Sylvian… he blew my mind! To this day some of those songs sound completely out of this world, melodically. Bliss.

EG: What feelings and emotions are you trying to spark off within your audience when you’re behind the decks?

Voigtmann: If I had to mention only one, it would be mutual understanding. The crowd needs to feel safe in the hands of who’s behind the decks. Then they show you exactly that – you feed off that and the circle starts over … It’s such a powerful feeling to receive all this energy from a crowd. After a set, I usually need to sit down for a few minutes and overcome this excitement.

EG: Fabric has regularly put you forward along a few handpicked local talents, what does Fabric represent to you?

Voigtmann: It’s where I decided to become a DJ. Its ethos, people. It’s a role model, an inspiration in many ways. I am very proud to have been chosen as a Fabric Room 1 resident.

EG: What is your view on what has been happening with the London scene in general? How it has been evolving under the constraints?

Voigtmann: The scene has changed a fair bit since we started promoting Toi.Toi.Musik. The constraints have taken their toll on the club goers. Sometimes I feel the overall excitement is lacking a bit as they need to take shoes off, get scanned by door staff, etc. It lost its hedonism in some ways. Saying that, I bring back the example of a sine wave. It comes and it goes. There are still true pioneer promoters out there searching for truth in throwing parties. That makes me proud.

“All my creative work revolves around what I know best – architecture”

EG: You’re German and you have chosen London as the city to live in while many artists decide to migrate to Germany, where they consider the environment more favorable. You like to swim against the tide?

Voigtmann: As soon as everybody does the same thing it naturally puts me off. I simply love London. What would I go to Berlin for when every Herbert does the exact same thing. Live cheaply and make music. There’s more to life than kicks and claps.

EG: Toi.Toi parties have been growing consistently over the years, with the reputation to be always of the highest quality. What’s your secret?

Voigtmann: Hard work and passion and persistence paired with staying true to yourself. If someday people don’t like our sound anymore that’s cool with me… Selling your integrity to stay relevant – no thanks.

EG: Where do you see the Toi.Toi parties to be in 10 years?

Voigtmann: Same place really – doing what we do with our friends

EG: Toi.Toi threw an amazing event during ‘Off Sonar’ week at the INPUT High Fidelity Dance Club. What was the idea behind that event? (The length, the venue, the lineup)

Voigtmann: Like the last 2 years, we invited only our closest friends to play – these events don’t have a financial driver where we invite a huge headliner… No – all guests are deeply rooted in our history. We believe in them; we have fostered them for years. They are incredible personalities and artists. The event was very successful.

EG: Anything we can wish for you for the rest of the year? 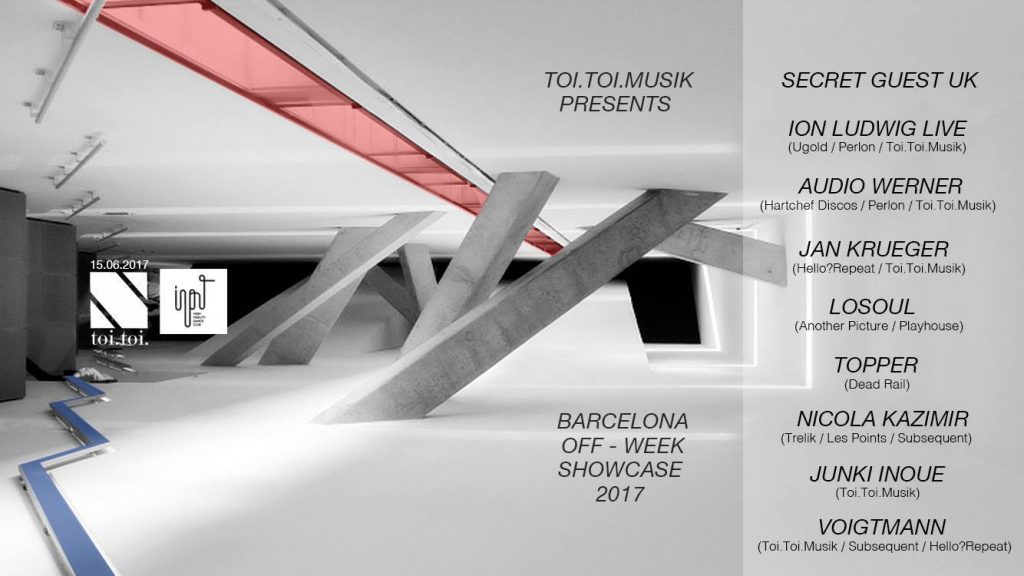