Members of the European techno revival, Ukranian duo Woo York produce a powerful, driving, dark yet sophisticated sound with a unique live performance placing them amongst the leaders in underground, electronic music.

Local heroes in their hometown of Kiev since 2009, Andrew and Dennis have been able to connect the world with their trippy, melodic techno through a string of releases with likes of Dystopian, Afterlife, Life & Death and Soma. Moving between pure dance floor techno and more experimental material, Woo York’s hardware driven live performance shows an experience and dexterity that allows them to challenge a crowd’s perception of contemporary live performance. Their aesthetic, although rooted in techno, is left-field focused and driven by electronic music’s vast influences; from the avant-garde to the fundamental creators of Detroit, Berlin and beyond.

We had the chance to talk with Woo York to discuss some relevant musical topics.

Electronic Groove: Hey, guys, thanks for taking the time to chat. Where are you talking to us from today?

Woo York: Hi from the sky. Talking to you being very high, from Airbus А380 as we are now on our way to our debut tour in Argentina and the starting point would be Buenos Aires’s finest superclub, Crobar. Thus, having 14 hours of sitting in a metallic tube making this interview a good time killer :)

Woo York: Summer is great because festival season and open airs are happening. We personally love outdoor events way more than smelly overnight club gigs. Obviously, clubs are also great and important, but it’s another story. This summer is going great for us so far. We performed quite a few amazing events all over the world. Among highlights, it’s definitely Afterlife Off Week event in Barcelona that was hosted at an amazing location which Park Del Forum is and by the way it was quite a challenge for us. We performed on the techno stage among Chris Liebing, Ben Klock, Kobosil and you know… these guys play pretty hard and pretty fast. But, we are happy that we managed to maintain a proper vibe for the crowd and nailed it big time, moreover, it was the first gig where we tested our completely new live program that contained most unreleased material and it worked perfectly. Also, there were few great festivals we had a privilege to perform at and Fusion is the one we will never forget. Just imagine we performed daytime at Turmbhune stage while the temperature was 38 C in shade, and the sun was literary burning and melting. We thought no one can survive dancing in such weather conditions, but to our surprise, we have got a packed floor and well, hats off to all those heroes who made it with us.

EG: For people who aren’t familiar with you yet how would you describe your sound?

Woo York: We are not big fans to put style shortcuts on our music, but answering your question we do like to quote a piece from one of the reviews on our ‘Chasing The Dream’ album that we released on Afterlife: “It’s not really techno, it most certainly isn’t house and it isn’t your typical flurry of ambient sounds. It is simply Woo York”. From the technical POV, our sound is bass-heavy with gentle drums, acid melodies, and lush pads. It is soft and intense at the same time.

EG: How did you develop that unique style?

Woo York: I would say it’s a matter of experience and moments of jamming with machines sound of which we find interesting. To put it into the context, we always liked how deep and warm mood sub-base sounds, or how bright and expressive Roland 303 lines are oscillating, or the richness of tone coming from Roland sh-101, etc… Thus, experimenting with this synthesizers and expressing our artistic ideas with them while creating a sort of limitation for yourself to only use these exact instruments is creating a signature sound. Obviously, it’s not a rule, but it is something how we imagine the spectral picture of our sound and what tools we use to embody it.

” From the technical POV, our sound is bass-heavy with gentle drums, acid melodies, and lush pads. It is soft and intense at the same time”

EG: How does playing in your home town of Kyiv differ from other venues like the new?

Woo York: As one of our friends said, “Kiyv is special, Kiyv needs to be earned”. Last year we had about 40 tours, we were invited to several key cities several times. For example, only in 2018 we performed 3 times in Berlin, including the Panorama Bar, 3 times in Amsterdam and Brussels, 3 times in Paris, Ibiza, Lisbon, London, Tbilisi, Tel Aviv, and so on .. We had a tour in Australia, Canada, and now on our way to South America. On the other hand, why for several years in our native city we have not had a single performance, remains a mystery to us. Perhaps because we rarely hang out, some even joke, calling us reclusive. Maybe because here we are not perceived as interesting artists, or simply people have different taste preferences, it is difficult to say.

EG: When did you first visit Ibiza?

Woo York: Our first performance, as well as our first-ever visit to the island, was back in 2015. We performed our debut show at DC10 as a part of Life and Death showcase. From this time we never missed a year without having a party in Ibiza.

EG: As regulars on Afterlife residency this summer, what are some of your favorite spots on the island?

Woo York: For us, Ibiza is not only a party town, rather it’s an amazing place with beautiful nature. When we are there we prefer to spend time on the beach, to chill and relax and get closer with nature desirable away from the сrowd. The best place to fit this bill is Cala Llenya. The beach is just 10 minutes away from San Carlos, and it is on the smaller side. That means smaller crowds, as well. Also, we love some cozy and natural places where we can get food from the sea and The Fish Shack on Talamanca beach is the best place for this. Other than that we always try to have some evening promenade in the Old Town if we have time. 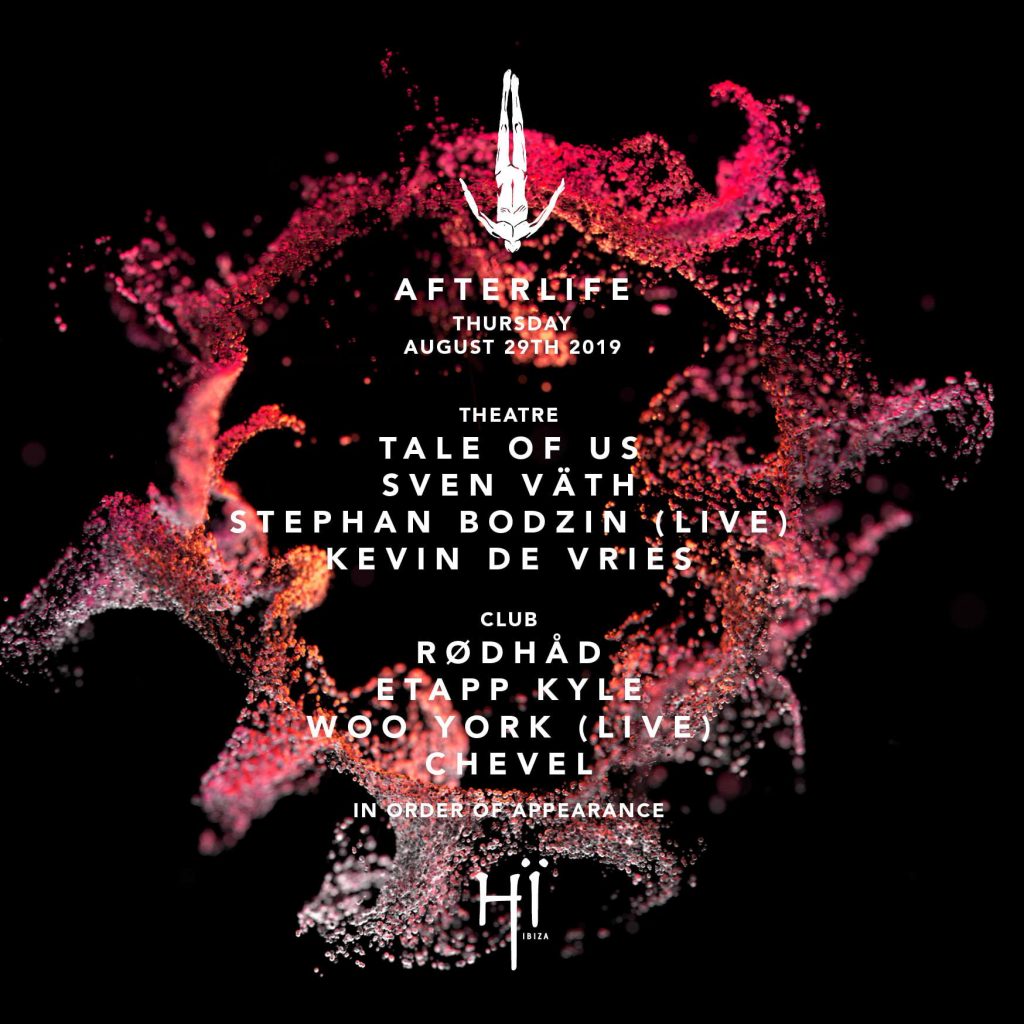 EG: How did the Afterlife and Tale Of Us relation start?

Woo York: We are with them since the very beginning, from the first release on the label where we put our hit record which ‘Poseidon’ is. Anyway, we met Matteo and Carm long before the story with Afterlife. In 2015, we released ‘The Valley of Songs’ on Life and Death, which was then run by Matteo (½ Tale Of Us). The label appeared only a few years later. One day, Matteo called me and said, “I came up with a new concept and will be happy if you to participate in it”. Since this time we are releasing our music on the output and performing on their events regularly, it already became a family affair. By the way, last year we released our first album ‘Chasing The Dream’, it also became the first album released on Afterlife. And the latest release we did was just a month ago where we put our ‘Discovery’ track that was largely anticipated by our fans.

EG: What do you love about playing in Ibiza?

Woo York: We always try to take a few days to chill and spend some time on the island while we have a gig there. It’s always relaxing moments with good friends and time to recharge batteries. Somehow Ibiza always goes so easy and it’s always a big pleasure to meet and chat to fellow artists that we have not seen for a while. Also, it is always very professional teams behind events which makes the performance itself very easy and we always enjoy it. No stress, only pleasure.

“For us, Ibiza is not only a party town, rather it’s an amazing place with beautiful nature”

EG: Is there anything else you’re excited about for the summer?

Woo York: Yes, we are about to have almost 2 weeks vacation with our families and children in a beautiful resort in Turkey.

EG: Your last album ‘Chasing the Dream’ was an important part of your career, tell us about the making of the project.

Woo York: Playing a live set brings you the luxury of creating new musical moments on the fly as well as testing these new moments and seeing how the audience reacts to them. While touring we have accumulated a lot of such ideas and at some point, we realized that if we take all of them we can create a complete musical story of varying emotional shades which are represented by separate tracks. Our musical story is ‘Chasing The Dream’. So, we can say that the starting point was when some musical ideas were created at this or that club or festival whilst we were touring over the last years. The only thing we had to do after is to sit in the studio and record all these ideas that were present in forms of midi sequences to the track instances.

EG: Do you have any new music in the pipeline?

Woo York: Oh yes! This year turned out to be very productive and we recorded a lot of new music. Now it’s time to find good homes for it. We have just signed a record deal with Drumcode and it’s not excluded that we will release an EP on Afterlife, nobody knows :)