Kaz James: “Now it’s time to move on and do something different!”

An Australian artist of Greek and Italian descent, Kaz James is one of electronic music’s most indispensable talents. Off the back of numerous chart-dominating productions including ‘Paradise’, ‘Through Your Love’, ‘Stronger’, ‘Not in Love’, and, most recently, ‘Footprints’, Kaz has catapulted himself to a position where he now resides as one of the world’s biggest DJs and producers.

Kicking off with a huge opening party on Sunday, June 12th, Kaz’s ‘Another Sunday’ residency will see the Melbourne-born talent fronting a total of fifteen headline shows at the stunning beach-front venue over the course of the summer, alongside a selection of A-list artists, DJs, and friends, hand-picked by Kaz himself.

EG caught up with Kaz James to learn more about the drop of ‘Footprints’, his upcoming residency at Fteliá Pacha, wines, and much more.

EG: Hello Kaz! We’re excited to have you here with us today. How have you been? Where are you right now?

Kaz James: Thanks for the invite. I am currently lying in bed at the Four Seasons in Dubai, I am fantastic! I had a show last night, so I am just bringing myself back to life!

EG: Congratulations on the release of your new single ‘Footprints’! What has the initial reception been like?

Kaz James: The reception has been pretty strong, I couldn’t be happier with it! Black Coffee is playing the record, Pete Tong is on Radio 1, and my boys, The Mambo Brothers, too – It’s been really good so far and I hope this continues!

EG: ‘Footprints’ is quite a peculiar name…What inspired this particular piece?

Kaz James: The song reminded me of a Balearic, beach vibe. I was thinking of a sandy beach, where you leave behind footprints and that’s where it came from!

EG: And what will your fans find on this one? What can they expect, sonically?

Kaz James: Sonically, it sounds similar to most of my other records. This one however has a lot more percussion, and I think that gives it more of a summer vibe. All-round it has the sound I have across all my records.

“The big event of the summer is my new night at Fteliá Pacha in Mykonos, which will be a huge focus for me”

Kaz James: The label is doing really good, we’ve signed a few new records from a few different people. The next record to come out is actually by Nick Morgan – The name is still TBC whilst he figures that out. I’ll be sure to let you know as soon as I have it!

EG: In other big news, you’ve just announced a new residency at Pacha’s new venture in Mykonos. Would you say it’s important for clubs to have their own residents?

Kaz James: So I was a resident at Scorpios for 6 years, but I have just left to go to Fteliá Pacha in Mykonos where I will be playing Sundays this summer, starting June 12th. I think it’s super important for clubs to have residents to build stand-out nights, which is what we did at Scorpios. Now it’s time to move on and do something different! 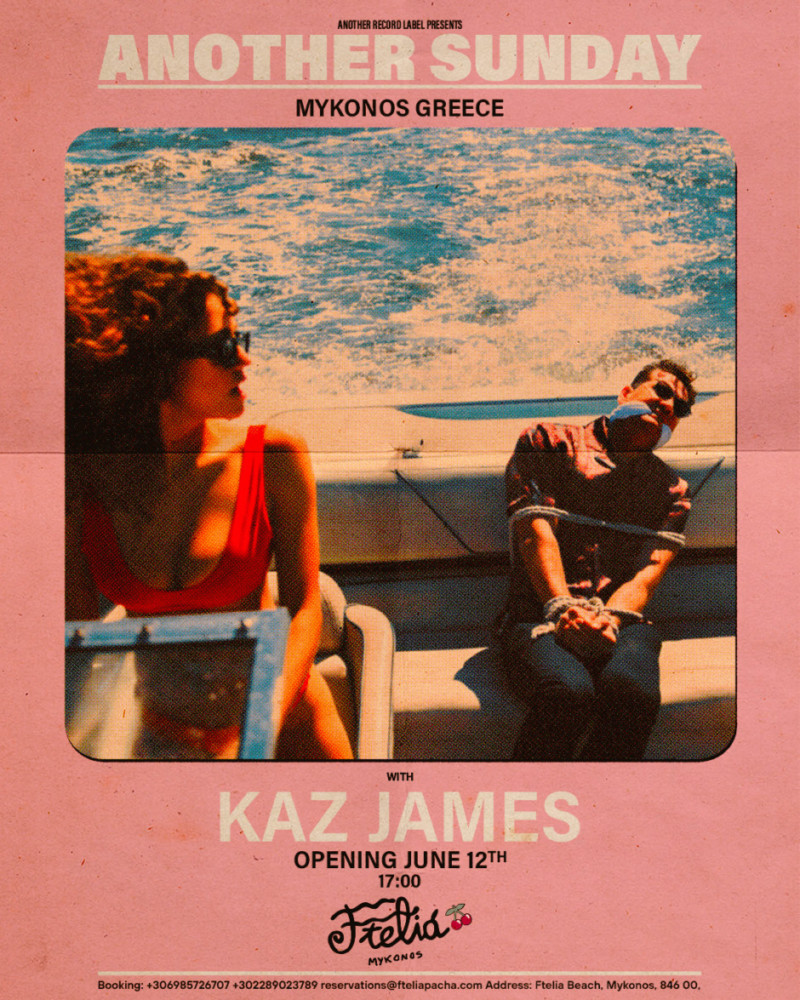 EG: Did you go through personal changes during the pandemic? Have any of them stuck with you to this day?

Kaz James: Despite everything that was going on, I thought it was actually a fantastic time to chill. I spent a lot of time doing stuff that I’d never had the opportunity to do before, such as camping and sailing. I wouldn’t usually get those breaks being on the move so much, so I made the most of not being able to and had a great time.

EG: We know you’re big-time into red wine. Can you recommend a couple of favorites?

Kaz James: There are so many! I would say Gaja and Vega Sicilia are two of my favorites.

“Despite everything that was going on, I thought it was actually a fantastic time to chill. I spent a lot of time doing stuff that I’d never had the opportunity to do before”

EG: What’s next for Kaz James in the next few months? What new milestones are you looking to celebrate?

Kaz James: I have a lot of shows coming up and I am touring at the moment. The big event of the summer is my new night at Fteliá Pacha in Mykonos, which will be a huge focus for me. I also have a lot of new records coming out, so stay tuned for these!

EG: Thank you for your time, Kaz! We wish you all the best for the future!

Another Sunday with Kaz James residency at Fteliá Pacha begins on June 12. You can learn more and purchase your tickets here.