Luuk van Dijk has unveiled his hotly-anticipated debut album ‘First Contact’, out this November 11th, on his own Dark Side Of The Sun label. The Dutch DJ and producer’s maiden LP is the end result of a long and intense voyage of discovery. Years in the making, it’s a project that Luuk can fully stand behind and be proud of. Next to a search for his own identity and his own place in music, it has also become a passage through time.

To celebrate the drop of ‘First Contact’, Luuk van Dijk gives EG the exclusive breakdown of every track on his debut album:

This is a track that I started 5 years ago in my old studio. My old studio roomie had this Roland SH-101 and I dived right in it. When I was making ‘Cosmiq’, I had no intention of putting this out. I was just having fun and letting my inspiration flow. Sometimes, when I’m listening to music, I put on my folder with only my own productions and put it on shuffle. That way I hear a lot of tracks that I’ve made in the past 7(ish) years and stumble across old ideas and tracks that have never seen the light of day. Every time ‘Cosmiq’ came on, I was like, “I need to put this out one day”. Because of this track, I wanted to make an album to showcase my other kind of music that people won’t maybe expect of me. I chose this track as the first track of the album because it kind of is the beginning of this album.

When I started to make House music I was very intrigued by the sound that was coming from the UK, especially acts like Disclosure. They’ve been one of my biggest inspirations during my musical journey. A couple of years ago, I had a period where I was listening to a lot of Garage and 2-Step, and I also wanted to make a song that didn’t have a 4×4 kick beat. I made the beat, made the chord riff, and recorded the bassline, and I could listen to this hook for hours. The chords gave me a very warm feeling, my kind of love song ;) I finished the track and noticed there was something missing, a vocal. I wanted something more “poppy”, something that could work on the radio. I reached out to LA’s singer Dawn Richard and when she sent me back the vocal stems I was mind blown. She really brought this track to a whole new level, I couldn’t be happier with the result.

3. Return Of The Gobble:

The process of making this track was so much fun, the kind of track-making sessions that every producer wishes for. I bought a new synth, the Korg M1. Famous for sounds of ‘Show Me Love’, ‘Rhythm Is A Dancer’, and ‘Gypsy Woman’. I’m a sucker for classic House sounds, so this is the workstation for me, haha. This track was made in a night studio session, I do these sessions once in a while where I make music all night and crash on the couch. I sampled some drums from old house tracks and made this nice groovy beat and started jamming on the M1. The beat’s groove was more focussed on the kick and the clap, and it worked really nice pair with this bassline that was timed on the kicks. I knew it was a different kind of bassline than I’d usually make, and the bassline itself was the main hook of the track. When recording the little chord stabs I remember I was thinking like, “damnnn, this shit’s funky haha”. When arranging and adding more elements throughout the track, I stumbled across this old ‘Loon’ sample and like I said, I’m a sucker for classic house sounds/samples and put it in. While I’ve put the ‘Gobble’ sample in I remembered that I’ve used it before, the ‘Return Of The Gobble’.

Most of the main tracks of the album were done and I wanted to have some interludes as well. Tracks like these are what made making this album such a pleasure. I just wanted to make something that was for listening only, some nice musical little interlude between all the dance tracks. It can be so liberating making music with a blank mind and not thinking about how a track can work on the dancefloor, will most people like it, etc. When you leave all these thoughts behind and just let the music take you, magic happens. I had the arp at first (the sound when the track starts) and just started adding more and more and was like, “Ok, fuck it, let’s add a quick, distorted beat, some weird FX”, and sampled this little fragment of this Megan Fox interview. I just loved the contrast of a nice cute melody and complex heavy beats. I wanted to end the song with a nice peaceful piano bit to kind of reset the listening experience you just had when putting on this album. I played the piano before making music when I was young and during this time I started doing lessons again. I asked my piano teacher Daan Herweg (the best piano player I heard, who also worked with a lot of Holland’s finest artists) to write an ending for this track together, thanks Daan!

Also one of those tracks where I started jamming and just let my inspiration flow. I thought it was cool to have more “organic” sounding “Kaytranada-like” drums to go with the more tight electronic bassline. I also really wanted a vocal for this track and asked my publisher to find a voice that sounded a little bit like Jamiroquai. I think Oneofmanysteves nailed it. Also one of those vocals that bring the track to a different level. The melody of the vocal together with the strings is so just so nice.

A little song I made on the plane on my way to my first tour in the US, which was so cool. I sampled this little part of the metro conductor in Brooklyn.

I made this track not that long ago and have been playing it a lot in my sets. Just a solid tech house beat with a groovy bassline hook that I kept on vibing for quite a while, then you know you have the right bassline and vocals by Kid Enigma. I always wanted to work with him, and while making this beat I knew I wanted him on it, and kept some room for his vocals. Very happy with the result!

I wrote ‘Hot Stuff’ while Holland was in lockdown and couldn’t wait to release it. It was one of those tracks that got quite some attention on social media and I’m happy to finally share this with you! While stumbling across the preset of the main chord stabs and making the sequence, it reminded me of that earlier Hot Creations, Diynamic, stripped-back synth kind of Deep House sound that I really loved when I started digging back in the days.

One of my favorites I ever made. I play a lot of oldskool House music and wanted to make a track myself that really could be made before 2000. The best way to make it sound like it’s from the past is to sample most of the elements and don’t try to mix everything. I sampled the beats from older house tracks, used a bass sample shot, and tried not to EQ most of the elements. If you want to sound oldskool, then it’s key to not sound too clean haha.

As I said before, I’m a big fan of the older stuff and I tried making a track the way they used to make music. With as few machines as possible, just a mixer, sampler, and some synths. So I made a groove, pressed record, and made the arrangement by just filtering the main group (drums, bass & music). This was a fun way not to have the usual arrangements, an eye-opener for me! Later on, I asked Gino, a percussionist from the majestic Jungle By Night band to start jamming and create some classic Tech House grooves, like it’s Ibiza in the year 2000. I also made this track during peak COVID-19, in a very emotional period, so I asked my friend MC Roga to preach.

The last couple of years I’ve been buying a lot of synths and when I buy a new synth, new songs happen :) I’ve made the chords of this track on the Roland SH-32, a very cool little synth for making trance. I wanted it to be an ambient track, but again, I couldn’t resist putting a beat on it, and wrote multiple bass melodies and a lot of pads to create a certain mood. This track has a lot of musical layers, I really liked that, but it also made this track the longest production process ever, haha. I also sampled vocals from the movie ‘Meet Joe Black’, which you can hear in other tracks like ‘Cosmiq’ and ‘Too Far Gone’. An absolutely beautiful movie. Artists like Leon Vynehall and Dusky were big inspirations for this track.

The last track of the album, and also a track that started as an Interlude and ended up being a full song. This song basically sums up how I’ve been feeling in the years 2020 and 2021, very emotional, and sad, but also hopeful. Everything will be alright. 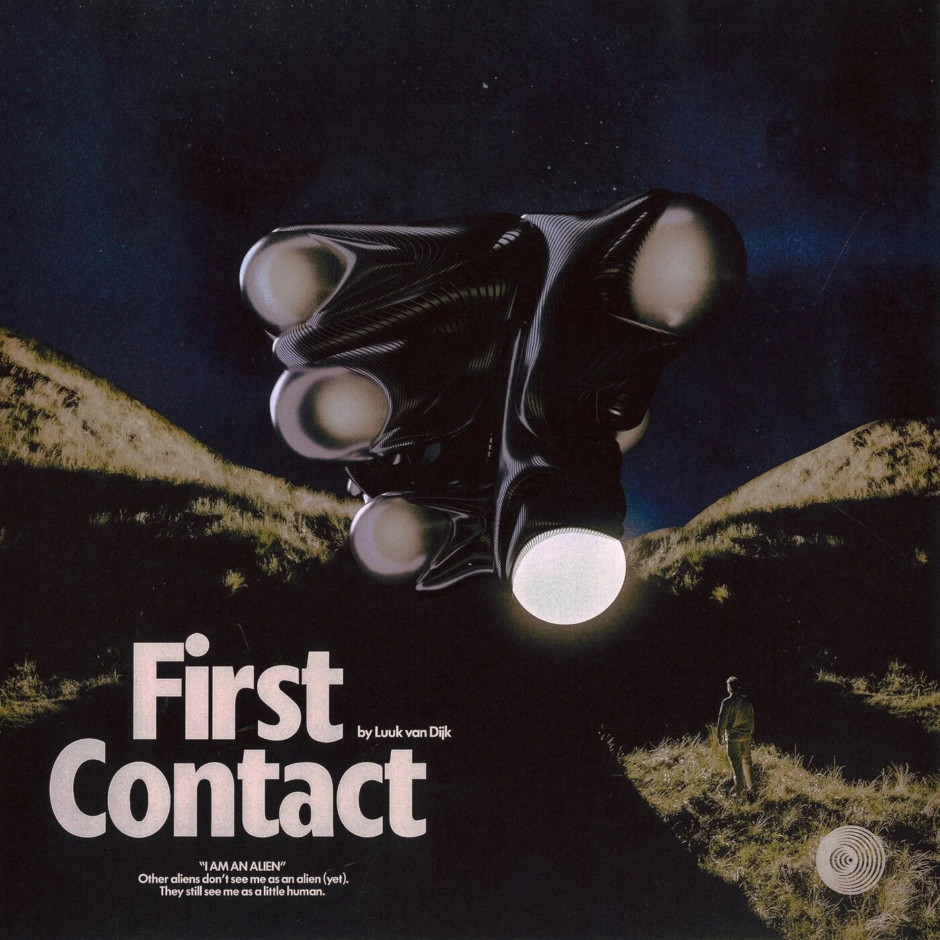 Luuk van Dijk’s ‘First Contact’ is already available to pre-order via Dark Side Of The Sun. Purchase your copy here.